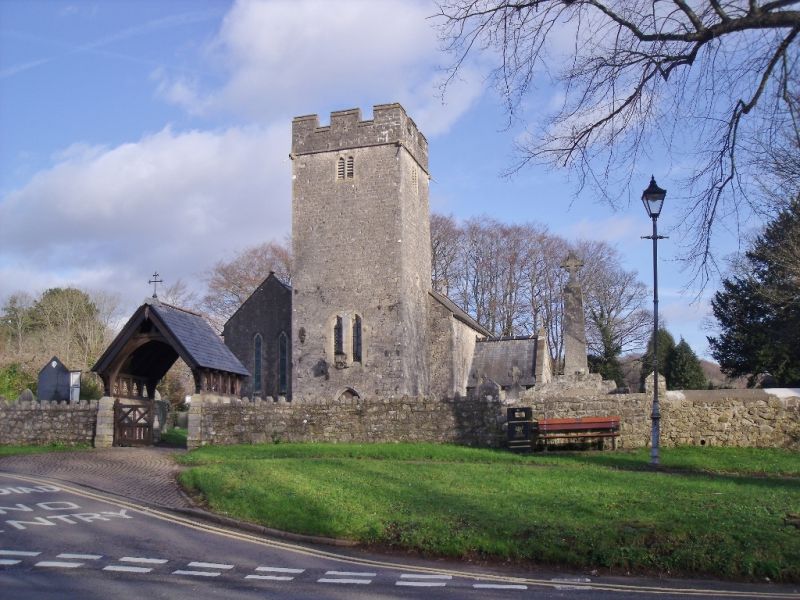 Location: In the centre of St Fagans village opposite St Fagans Castle.

The church has clear C12 origins and the first rector is recorded in 1301, but it was greatly altered and enriched in the early C14. The porch was added in the C15 when the church was also reroofed. The tower appears to be a C17 rebuild and this was heightened and repaired in 1730. The whole building was restored by G E Street in 1859-60 and he added the north aisle and the vestry, all this at the expense of Baroness Windsor. Since then there has been little change, but the tower was repaired in c1985 and the chancel was restored in c1997.

Built of local rubblestone with Welsh slate roofs. The medieval work is all fairly random, the tower is of coursed and roughly squared stone, dressed quoins to both. The C19 work matches the medieval fairly closely, but with ashlar buttresses and Bath stone dressings.
Nave, north aisle, chancel, south porch, unbuttressed West tower with embattled parapet, north vestry.
Only the south wall of the nave is visible, the north one being entirely covered by the aisle (see below). Small pointed window on either side of the porch with a large 3-light Decorated window to the right; this has cusping to the lights. The left hand lancet is C14, the right hand one is a Street copy. Coped east gable with apex cross.
The chancel has two 2-light Decorated windows on both north and south walls, trefoil headed lights with trefoils above. Small pointed priest's door. East gable with diagonal buttresses added by Street. 3-light east window with wheel head and trefoil headed lights. Coped gable with apex cross. Small vestry added between the windows on the north wall; doorway with arched window above. Small window in the return. Very steeply pitched gabled roof with chimney where it joins the chancel.
The north aisle has diagonal corner buttresses and a central stepped one. Two 2-light north windows with trefoil heads, the east window is the same. Paired lancets with trefoil heads in the west gable. Coped gables repeating the pitch of the nave roof.
The tower is square and tapering and has three stages. Moulded plinth to the base; pointed west door with dripmould over; above this are paired trefoil headed lights. Small light on the south wall for the stair and a slightly larger one for the ringing chamber. The bell chamber has paired arched louvred lights on each face of the tower. String above this with gargoyle heads at the corners, battlemented parapet. The tower is said by Newman to carry a shield dated after 1616 and a plaque dated 1730 but these were not seen at resurvey.
The south porch is wide and windowless. Plain pointed entrance arch with sunk chamfer. Coped gable with cross.

The interior is plastered and painted with the masonry features revealed. The C12 origins of the building are seen in the inner face of the Norman south doorway, the window rere-arches in the nave and, more recently revealed, also in the chancel. Early C14 features are the rere-arches to the chancel windows, the priest's door, the tall chancel arch with its steeply pointed head, the tower arch and the triple sedilia and piscina in the chancel. Newman states that, 'the early C14 work of the chancel and nave [are] unmatched for its decorative finesse in the churches of Glamorgan'. The left hand jamb of the large south window in the nave has similar treatment and was possibly a support for the rood beam. C15 features are the five bay waggon roof in the chancel and the bowl of the font. The Street work of c1860 includes the tiled floors, the nave roof, possibly the tower screen (Newman) although it looks more like c1880 and the furnishings, especially the choir stalls and pulpit. The north arcade of three bays is Transitional in style to match the chancel arch; open roof with arch braced tie beams. The two bells have come from Leckwith church. There is a series of windows by Hardman dating from the 1860s, which were paid for by the Windsor family (qv St. Fagans Castle}.

Included and highly graded as a medieval fabric with interesting Victorian additions and restorations by G E Street.