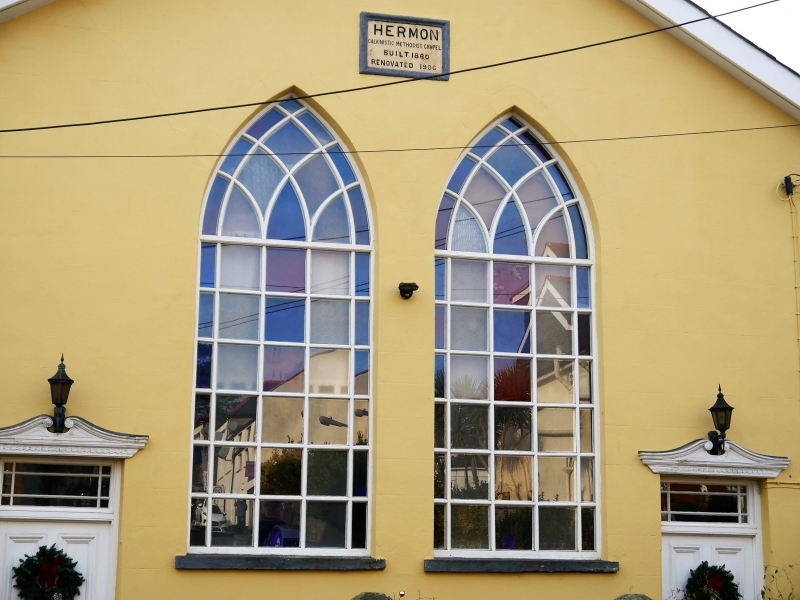 Location: Near the centre of the village SW of the main village thoroughfare, set in walled yard with 3 iron gates, railings with spear finials and 5 piers.

Built 1860, renovated 1906. Conversion to house c 1998. In mid C19 the nearest Calvinistic Methodist chapels were Ebenezer Whitchurch and Bethel Morganstown. Cause first established in Tongwynlais in cottage in Queen Street. First building known as Y Deml (The Temple) was remodelled after 20 years with floor levelled and gallery constructed. Served the iron and tinplate works at Melingriffith. Started as a Welsh speaking chapel, eventually reluctantly transferring to English in 1923, its loyalty to the Welsh language causing financial hardship as congregations diminished.

Small chapel converted to a house. Built of stone clad in scored render with long and short rock-faced quoins and some yellow brick to side and rear; Welsh slate roof with yellow brick lateral stack to left. Gable end frontage with renewed bargeboards, overhanging boarded eaves, a close-set pair of long pointed-arched windows with intersecting tracery, coloured glass and painted stone sills; above is the name and date plaque. Ground floor has doorways either side of windows with 6-panelled doors, margin glazed overlight and shallow swept pedimental heads (modern?). To each side and end is a single arched window over 2 storeys. Single storey Sunday School extension to rear has 6/2 pane sash windows and doorway with segmental-arched head .

Under conversion to dwelling.

Included notwithstanding conversion to house as a mid C19 chapel retaining much of its external appearance from this time.