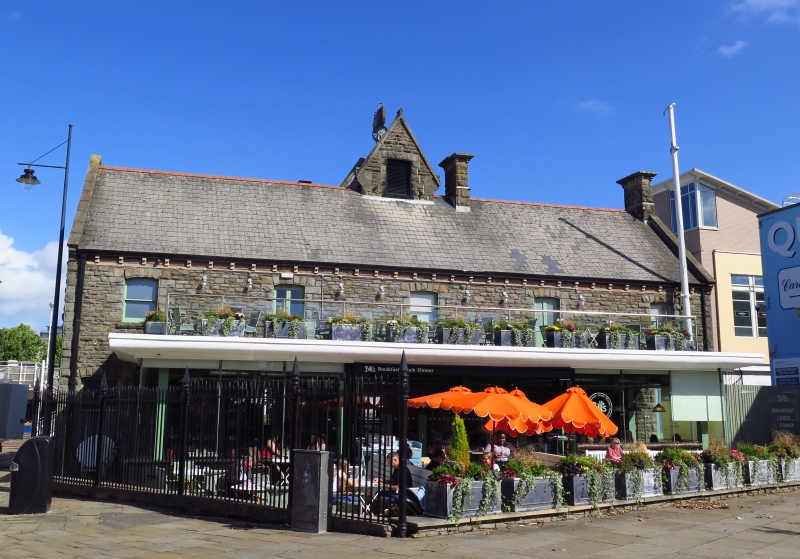 Location: Detached to NE of the Graving Docks and immediately to left of The Big Windsor PH.

Probably built in 1860s; shown on 1st edition OS map but not shown as the Pilotage Office until 2nd edition (1900); believed to have been originally stables.

2-storey, 5-bay snecked rubble front with bullnosed quoins; slate roof, bracket eaves, freestone gable parapets and rubble chimney stacks with bracket cornice to left. Central tower with saddleback roof surmounted by ship weather vane (modern), flanked by blind attic gables. Eaves bands, to tower and main building, of Radyr stone over pale freestone; moulded kneelers throughout. Sashes without glazing bars to both floors, square headed to 1st floor, paired and taller to centre and camber headed below with voussoirs and stilted labels. Similar label to central entrance extends either side over narrow flanking windows, that to left has been converted for use as a letter-box; granite nook shafts with foliated capitals and panelled double doors with overlight. At the base of the tower is an inset compass face with rope moulded surround; deep stone lintel and tall, pointed relieving arch above; blocked triangular headed opening to the top. The compass was manufactured by W Weichart of Cardiff, and indicates wind direction, operated by weather vane. 3-bay left hand side with sashes flanking camber arched central blocked opening; plain right hand side. At the rear, the back of the tower is seen at ridge level; modern window. Mostly camber headed sash windows.

Listed for its special interest to the history of Cardiff Docks.