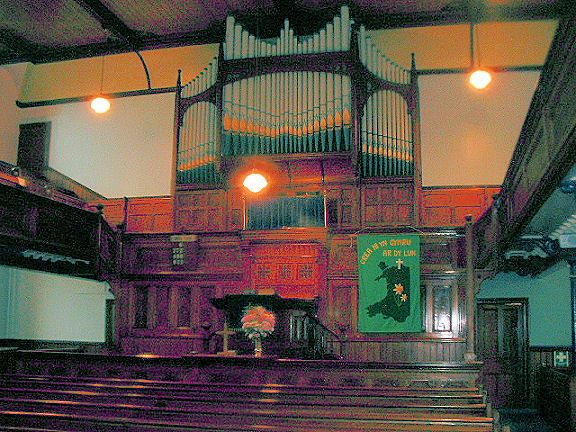 Location: On the corner of Clwyd Street and Brighton Road.

Built in 1855 to designs of W Owen, architect of Llanrwst, and extended in similar style with the addition of a school room c1880.

Coved ceiling divided into panels by moulded cross-beams carried on ornate brackets, divided into panels which are boarded with painted decorations in the angles. Complete interior fittings, dating from the extension of the church with the addition of the schoolroom to the east. Open pews face large pulpit in contemporary set fawr enclosure with deacons’ seat. Horse-shoe gallery is carried on cast-iron columns and brackets and has raked seating. Panelling to parapet of gallery is continued across east wall of set fawr and organ loft above: it exploits the knotting of the wood to high decorative effect, is divided by pilasters and has scalloped cornice. School rooms form cross-wing of chapel to the east, along and the deacon’s room, etc. The upper school room runs the entire width of the building in 5 bays and has arched braced trusses with scalloped moulding; ornate open-work plaster ceiling roses probably serving as ventilators.

An excellent example of chapel architecture, with a complete, richly detailed interior.