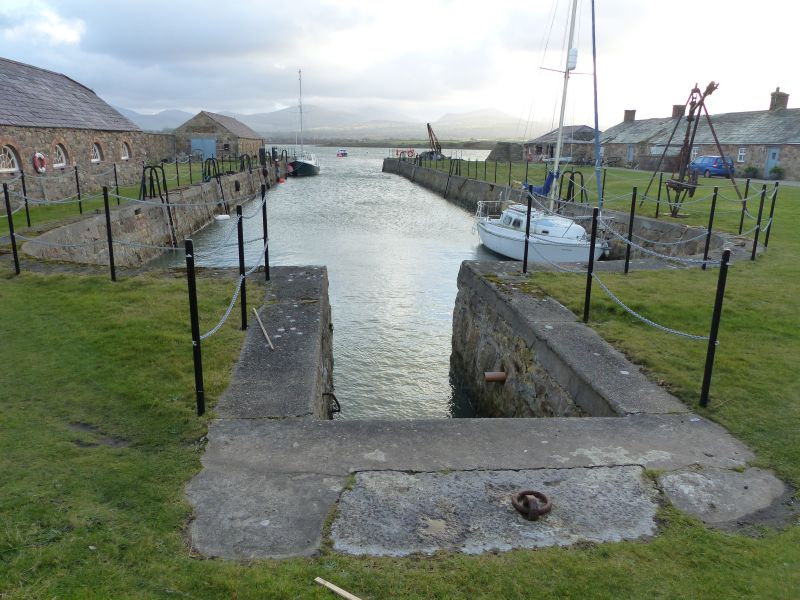 The dock was built in 1824-6, contemporaneously with enlargements to the adjoining fort, although it had been part of the original scheme. Fort Belan was begun in 1775 by Thomas Wynn as a coastal battery for his Caernarvonshire Militia which he garrisoned at his own expense. The threat posed by the American War of Independence was the background to Wynn's decision to built the fort which is the only British purpose-built defence relating to this war. Following the French invasion of Wales in 1797 the vulnerability of Britain's coast led to Wynn, now Lord Newborough, garrisoning Belan once again. The dock now harbours pleasure yachts and fishing boats.

Built as a tidal dock, the dock is attached to Fort Belan by the outer curtain wall that runs eastwards, from the salient angle at the south end of the fort, to join the dock's own curtain, or perimeter, wall. The dock complex includes a dock offset to north, a broad quay to its south and single-storey rubblestone and slate-roofed domestic and service ranges against the wall on all three sides. The narrow dock has battered stone walls and concreted copings; projecting stone steps down at west end. The surrounding stone buildings are all rubblestone with Glynllifon estate red brick dressings and Dinorwic slate roofs (the Dinorwic quarries were owned by Lord Newborough). The north side has dockside stores No. 8 and No. 4; the former being a 7-bay building with half-hipped roof, distinctive cast-iron small-pane lunette windows and camber-headed doorway with recessed boarded doors; the other stores building is linked by the curtain wall and is gable-ended with slit ventilators and a modern seaward extension. The south side has windlass at the mouth of the dock, close to the slipway; at east end is 3-bay hipped roof stone boathouse with segmental arches, centre and right with doors, left infilled with 6-pane window inserted into blocking. The east or seaward half of the long south range includes the forge, then the paint stores and then, to the centre of the whole range, Dock Cottage; these have red brick chimney stacks with toothed cornices, boarded doors and square-headed windows - small-pane pivot-hung to the forge and paint stores and 4-pane sashes to Dock Cottage. Finally, at the west end, is dockside stores No. 3 which has six small-pane lunette windows as on dockside stores No. 8; this is without chimneys. The shorter east end of the dock has the Boys' Quarters with half-hipped roof and similar brick chimney stacks; symmetrical front with iron-framed diamond-paned windows to centre, boarded doors beyond and 16-pane windows to extreme ends; all windows have red brick jambs. In the corner to the right is the chain furnace, about which has been made the remarkable claim that it is the only remaining example in the world. It is now roofless but retains the circular brick chimney over the central furnace and slit openings to the outer walls. Slate lintel to furnace and tar tank behind.

Listed Grade II* as an unusually interesting and well-preserved early C19 dock with its associated buildings and for its contribution to Fort Belan, with which it has strong group value.