A Grade I Listed Building in Bontnewydd, Gwynedd 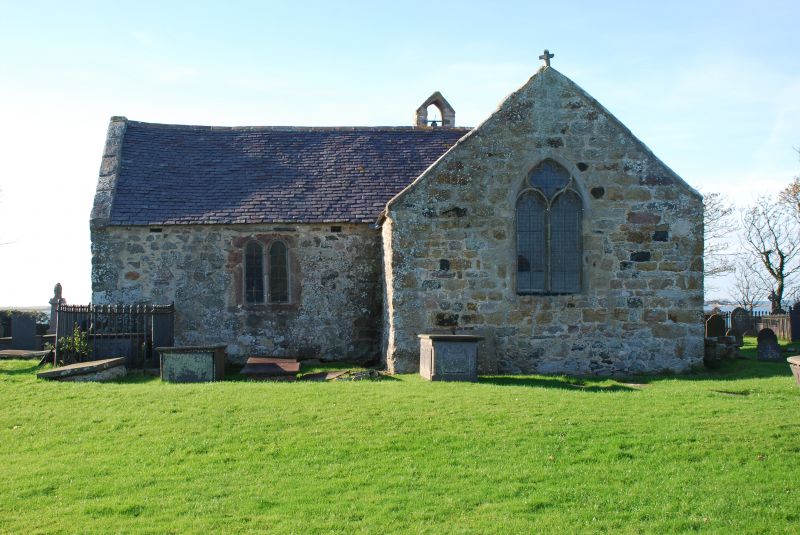 Location: Situated NW of Llanfaglan, in an isolated situation in a field some 150m E of the minor road which runs N - S along the edge of the Afon Gwyrfai estuary.

Originally a chapel of Llanwnda and annexed to Clynnog-fawr. C13 to C14 nave, S chapel added in late C16 or early C17. A plan drawn on a terrier of 1788 shows the old chancel being some 2.8m long and 3.4m wide, and the nave 4.5m wide, but present N porch and existing chancel are probably of c1800 (though earlier material is re-used in the porch). There is said to be a gravestone in the churchyard with the inscription "Owen Jones, of Glan y mor, died 5th March, 1847, aged 99. He was warden when the second part of the church was built". The church escaped Victorian restoration and still retains an interior as it was c1800, with whitewashed roofs, box-pews and very simple chancel furnishings.

Single-roofed nave and chancel with large S transeptal chapel to same roof height. N porch and W bellcote. Chancel walls are of coursed rough ashlar, the rest of rubblestone with gritstone quoins. Straight vertical joint between nave and chancel. Slate roofs all to same ridge height, coped gables with weather-worn gable cross on chancel. This cross was described by Lewis in 1833 as "the remains of an ancient Cross curiously sculptured" but may be contemporary with the chancel. Nave has no windows, chancel has only 2-light E window, C14, with quatrefoil head and two trefoiled lights. The S chapel has small 2-light window in both E and S end walls, both with simple round-headed lights and flat dripstone. Nave W end is windowless with simple gabled bellcote with pointed opening, no bell. Broad N porch has stone side walls, open front gable with head of a medieval truss; arch-braced collar with cusped apex. Massive chamfered purlins and other beams thought to have been reused from the original chancel. Two C13 gravestones have been reused to form the head and sill of a long E window opening. The sill has an incised foliated cross and ship, probably the gravestone of a sailor. Narrow plank door in plain pointed doorway.

Rough plastered whitewashed interior with whitewashed roof timbers. Floor of slate slabs of varying sizes. Nave walls are battered. Nave roof of three bays with arch-braced collar-trusses, chamfered beneath, and straight wind braces in lowest panels of double-purlin roof. An early C6 inscribed stone forms a lintel to the rear arch of the doorway, moved there in 1834. A roughly quadrangular pillar-stone, it is inscribed `FILI LOVERNII / ANATEMORI' in Roman capitals within an incised oblong.

Chancel undivided from nave, has an elliptical plaster ceiling springing from a moulded cornice. C14 E window has been reset and has sill contemporary with chancel.

S chapel is fully open to main body, spanned by heavy main wall-plate beam carrying last two trusses of nave. Chapel is some 4.6m by 5.5m and has 2-bay roof with 2 broad arched-braced collar-trusses, chamfered purlins let into the trusses and cusped wind braces on two levels. E and S windows are hollow-moulded and have splayed reveals. To right of E window is rough stone bracket projecting some 25cm about 1.5m above floor level.

Furnishings: Exceptional mid to later C18 set: Oak C18 communion table with slender turned legs and moulded front stretcher. C18 communion rails enclose table on 3 sides; slender turned balusters, moulded rails and corner posts with shaped finials. Chancel SW large tiered oak pulpit and reading desk with sounding board, all panelled with beaded framing to fielded panels. Pulpit has canted front facing into S transept; inscribed 'I 1767 RW'. C17/C18 seating in nave, chancel and S chapel. Several box pews with plain framing. A number of fixed benches with round shaped ends and plain oak benches with splayed feet. Many are inscribed with initials and dates. Four bench ends are inscribed 'I.G.,Esq. 1737', a large box pew with enriched top rail (S chapel W side) and three nave benches 'I / DM / 1769', one bench-end 'N / RK / 1763', and another similar and three plain benches 'Sr WO / 1777' said to be for Sir William Owen of Bodern and Orielton. S chapel E box pew 'WHA 1808'. Font, said to be C13 or C14, is a plain heptagonal bowl of gritstone on a rough heptagonal shaft.
Numerous C18 slate memorials: on N wall of nave: Hugh Lewis d1731 and his wife Ellen; John Lewis d1709 and 'his Brother and 4 Sisters Who Died Young'; John Morris d1807. No memorials on S wall of nave. On E wall of chancel, to right of communion table is slate tablet to Gwen Lewis (d1738). On W wall of S chapel is a slate tablet to Lewis Morris (d1707) and Elin his wife (d1716).

Listed Grade I as a rare example of a medieval church unrestored in the C19, so retaining an exceptionally complete set of C18 furnishings. Outstanding isolated setting.