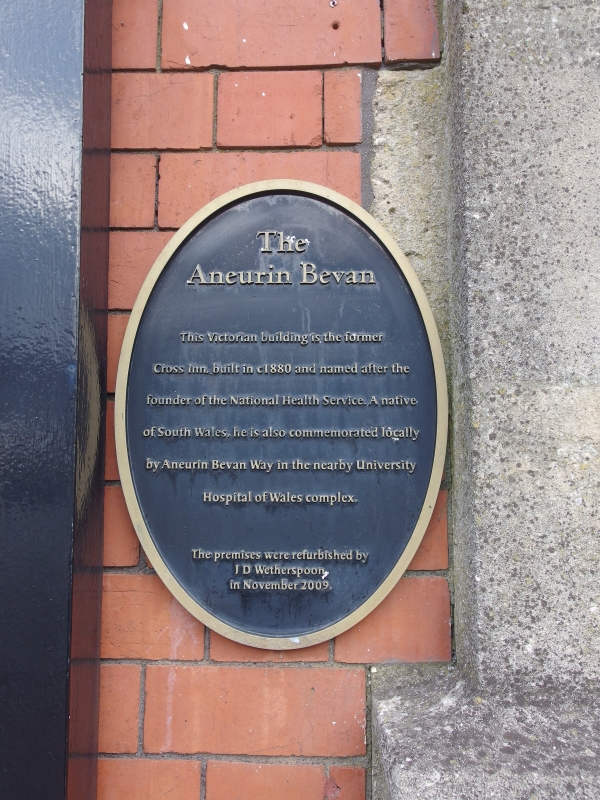 Location: Prominently sited on a traffic island facing S towards the A470 flyover above the A48 dual carriageway. Triangular position at junction between Merthyr Road (A470) and Caerphilly Road (A469), with ma

Early C20 custom-built public house in a free style influenced by the Queen Anne revival, and designed to fit road layout. Replaced an earlier inn of the same name, shown on the Ordnance Survey of 1880 and possibly slightly N of the current building.

Symmetrical 2-storey 3-window entrance front to S. Central cross-gable with pilasters running back to meet splayed wings with flank elevations, which follow roadlines to E and W. Constructed of red brick with pale freestone dressings and slate roofs. End chimneys with ribbed stems, ashlar bands and moulded cornices. Prominent dentilled cornice combined with segmental pediment over central 1st floor window. Plain string course and moulded sill band to 1st floor, all continuing around sides; banding to gables. Small-pane wooden windows, mainly 3-light with transom. These are round-headed with keystones and sill brackets to ground floor and square-headed to 1st floor. South entrance front has central doorway with dentilled lintel and round-arched overlight (partly boarded) between banded pilasters. These support a stone balcony cantilevered on large brackets, with scrolled ironwork panels to front. Double panelled doors to entrance. Three-light window above flanked by 2-light windows. Gable parapets with stone cappings, sinuous to upstands. Flanking the cross-gable, the short wings are slightly set back, with attached ornamental rainwater goods.
To E side, gabled wing is 2-storey 2-window with pilasters and central stack corbelled at 1st floor level. Detail as front including banding and 3-light windows. Lower bay to R with double panelled doors under round-arched hood supported on corbelled shafts. Three-light window above without transom; rendered gable end facing N. Long low single-storey outbuilding continuing further R.
Similar 2-storey 2-window gabled wing to W side, L of which is a lower 2-storey range with ridge stack, and a further cross-gable to far L. Unusual paired doorways under segmental hood to R separated by a panelled pier. Single door with side-lights under segmental hood to L. Between the doorways is a round-arched window flanked by cross-windows. Four 2-light windows to 1st floor, that to L tall with 2 transoms. Two-storey 3-window cross-gable with pilasters and detailing as before; central window to each storey flanked by narrow lights. Dentilled cornice above 1st floor windows and banding as S front. The rear of the inn is rendered, with 4-pane horned sashes with red brick dressings.

Vestibule inside S entrance with 2-light small-pane window straight ahead, and late C20 door to L leading into public bar, which has moulded cross-beams of irregular arrangement and wainscot panelling. The bar along the N side of the room is original but has been refaced. The double entrance to the W side leads into the public bar to the R and lounge bar to the L. The lounge bar has a moulded cross-beam and deep moulded ceiling cornice. Small cast iron fireplace to N with tile inserts and wooden mantelpiece. Panelled doors in heavy moulded surrounds. Doorway to NE to further rooms including a large N room with suspended ceiling.

Listed as a well-detailed public house in the Queen Ann revival style, in a prominent position and designed to fit the road network.