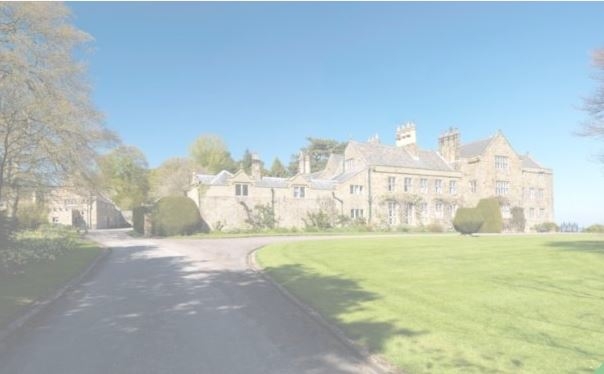 An H-plan Jacobean mansion built in 1603 (date on first-floor fireplace) by John ap David (who adopted Davies as his surname). The house had a double-depth plan with priest's lodging behind the hall, a parlour and chapel in the E wing, and kitchen in the W wing. From the late C17 to 1821 Gwysaney was leased as a farmhouse. In 1789 it passed through marriage to Bryan Cooke of Owston, Yorkshire, whose son Philip adopted the name Davies-Cooke. Philip Davies-Cooke (1793-1853) inherited Gwysaney in 1821 and set about reviving the house and the estate. The unsafe E wing of the house was demolished c1823, at which time dormers were removed, while the hall was subdivided into an entrance hall and drawing room, and the former kitchen became a dining room. Philip's son Philip Bryan Davies-Cooke (1832-1903) commissioned J L Pearson, architect of London, to extend the house, but Pearson's original ambitious scheme was not carried out. Instead a more modest service wing was added in 1863-5, while Pearson also re-roofed the original house and remodelled the E gable end of the main range to which the E wing had been attached. Further minor additions to the service wing were made in 1906 by F A Roberts, architect of Mold, for Philip Tatton Davies-Cooke (1863-1946). A smoking room was added next to the drawing room at the same time.

A large Jacobean house facing S, comprising the original house on the R side, with the main service wing of 1863-5 to its L, and a further W service wing of c1906 at the L end. The original house comprises a main hall range with cross wing to its L, 3-storeyed, of coursed stone, coped parapets with ball finials, ovolo-moulded mullioned and transomed windows, coped gables with moulded kneelers and slate roof. Some windows incorporate metal-framed casements, and others incorporate diamond panes in wooden glazing bars of 1863. The 5-bay main range has a moulded band between lower and middle storeys, and an eroded band between middle and upper storeys comprising lozenge and disc friezes. The lower and middle storeys have 5 cross windows, the upper storey has three 2-light windows. The doorway is on the L side and is reached up stone steps. It has a hood mould and shallow arch in a stop-chamfered surround. The studded door has studs delineating '1640 RAD'. The cellar has three 2-light windows. The cross wing has 5-light mullioned and transomed windows with hood moulds in each storey, and a 5-light cellar window. In its R side wall are 3-light windows in middle and upper storeys, a blocked window in the upper storey, and 2-light cellar window. The opposite L side wall has a cross window with hood mould in the middle storey and a blocked 2-light upper storey window.

Further W is a lower 2-storey 5-bay main service wing of 1863-5. It is of snecked stone, has a parapet and a coped gable at the L end on moulded kneelers and with apex ball finial. The slate roof has a single ridge stack with 4 diagonal shafts. In the lower storey are 2 cross windows to the R, while the remaining 3 windows are similar but deeper with 2 transoms, all incorporating diamond glazing bars. Cross windows to the upper storey. Set back at the L end of the main service wing is the W service wing, of tooled stone in the upper storey but built above an earlier rubble stone wall. The slate roof has a single stone ridge stack. A 2-storey lean-to is attached to the service wing with 3-light mullioned windows. Further L are 2 half-dormers with 2-light mullioned windows and coped gables with ball finials.

The R gable end of the original hall range has detail mainly of 1863-5 and on the site of the original E wing. In the lower storey is an ashlar canted bay lighting the drawing room, added by Roberts in 1906, with 4-light mullioned and transomed window and a 4-light mullioned cellar window. In the middle storey is a 3-light window, and 2-light window in the upper storey, both with hood moulds. Behind and set back from the angle of the main range is an added single-storey projection with its roof concealed behind a parapet, built as a smoking room in 1906. It has a 4-light mullioned window in its side wall and similar 3-light window in the rear wall. Above the rear windows is a tablet dated 1906 and the initials 'PT & D DC' in raised letters.

To the R of the smoking room, at the rear of the main range, is a 3-storey projecting bay of which the lower 2 storeys comprise the former priest's lodging, while the 3rd storey was remodelled with its roof concealed by a parapet in 1863-5. It has two 2-light windows with lozenge glazing in the lower storey under a linked drip stone (and probably originally formed a 5-light window), a 5-light mullioned and transomed window in the middle storey and two 2-light upper-storey windows. In its R side wall is a cross window in the middle storey and 2-light window above. Attached in the lower storey is a projection with round-headed arch to a boarded cellar door reached down concrete steps, above which is a 2-light window. The rear of the original cross wing has a 4-light cellar window, with 4-light lower-storey, 5-light middle- and upper-storey and 3-light attic windows, all with hood moulds except the cellar. An external stack in the R side wall of the cross wing has 3 diagonal shafts.

The rear of the main service wing has a narrow 3-storey gabled wing to the L, then a parallel wing and cross-gabled projection at the R end. A single-storeyaddition to the L has a boarded door in the L side wall and 5-light mullioned window facing the rear. Behind it, the L-hand gabled wing has coped gable and finials, a cross window in the middle storey and 2-light window above. Set well back on its L side is a single bay attached to the cross wing of the original house, which has a cross window in the lower storey and 2-light windows in the middle and upper storey. On the R side of the gabled wing are 2-light windows, then projecting forward the parallel wing has a 5-light mullioned and transomed window in each storey, but in the lower storey the 2 central mullions below the transom have been removed and replaced with a single large pane. The wing has a L end stack with diagonal brick shafts. Further R, also behind the main service wing, is a 2-storey gabled projection. Its gable end stack has 2 diagonal stone shafts, and a lower 2-storey projection. The side wall faces a service yard at the W end. It has 4-light mullioned and transomed windows, the upper window in a gabled half-dormer. The service yard is enclosed by a stone wall. The service wing has a single-storey boarded lean-to, a projection R of centre, beyond which is a garage under a hipped roof. The W side wall of the service wing has a 2-light mullioned half dormer similar to the front elevation.

The house retains elements of a double depth plan, but the original arrangement, probably with cross passage and a priest's lodging behind the hall, has been slightly altered. The hall and cross passage have been amalgamated and subdivided into 2 rooms with wood-panelled walls, of which the easternmost room has a fireplace with a rich Jacobean-style overmantel and 2 former stair newels placed in front. The main stairs was originally reached from the hall but the lower part was rebuilt at the rear of the cross wing by Roberts in 1906. The later work matches the earlier style which includes shaped and pierced fret-cut balusters and square newels with finials. In the cross wing, originally the kitchen, is a wide chamfered fireplace, but placed in front of it is a heavy stone chimneypiece brought c1823 from the great hall, and comprising scrolled pilasters and mantel with foliage and the family crest in low relief.

The cross wing retains its original W Tudor-arched doorway with mullioned overlight, through which is the main service wing. The wing has a central corridor, domestic Gothic detail such as Tudor-style doorways, panelled doors and chamfered fireplaces. The former servant's hall has a wide fireplace arched to a flat centre.