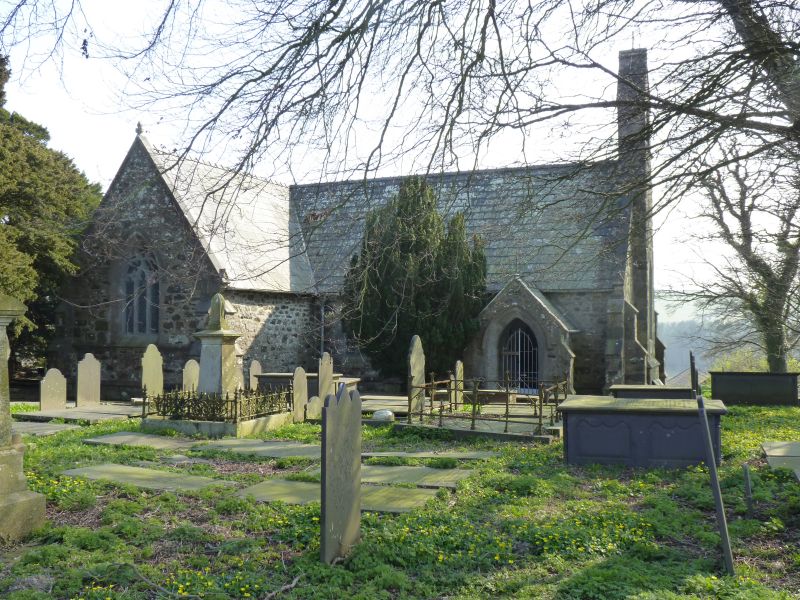 Location: Situated in high isolated position off the B 4366 with only a few houses around in tiny settlement of Llanddeiniolen; set in roughly rectangular churchyard with roughly coursed rubblestone wall and si

Entirely rebuilt in 1843 by J G Weightman and E M Hadfield of Sheffield close to the site of the old church, which stood immediately to the north-east. Weightman and Hadfield were prolific church builders of the mid-C19, most of their major ecclesiastical commissions being for Roman Catholic clients.

Largely unaltered Victorian interior retaining a few features from the earlier church. Simple stone-corbelled arch-braced roof in 4 bays to nave with curved struts from collars to principal rafters, repeated in 2 bays to each transept. Double-chamfered pointed chancel arch with moulded capitals and bases to half-octagonal responds. Octagonal pedestal font in north-west corner of nave has superscription "IHC/ 1665/ WS: WP"; other fittings all Victorian including nave and transept pews, brass lectern, octagonal wooden pulpit with Gothic tracery panels, altar rails and reredos. Dark stained glass in east window and stained glass of c1940 (in C19 style) to nave south windows; bell is 1930. Board in vestry records the rebuilding of the church in 1843 with a grant from the Incorporated Society for Promoting the Enlargement, Building and Repairing of Churches & Chapels.

Monuments: several refixed from old church; in nave (south wall) plain pedimented tablet to Capt. John Browning RN (d.1813); chancel (north wall) marble memorial with plain pilasters and urn to top commemorates William Thomas (d.1763) and his wife, Dorothy (d.1786), erected 1817; on south wall a tablet to the son and daughters of Rice and Margaret Thomas with dates of death between 1775 and 1856; north transept, brass plate with shield to Robert Wyn, rector, d.1720 and another with hour glass, skull, cross bones and skeleton holding arrows to his daughter, Elizabeth (n.d.) on east wall; on west wall to members of Morris family (d.1805 to 1830). Slate slab First World War Memorial on south wall of nave and further late C19 and C20 tablets throughout.

Included as an unspoilt mid-C19 parish church in the simple Church Commissioner style of the period; largely unaltered interior retains C18 monuments and other fittings from the old church.