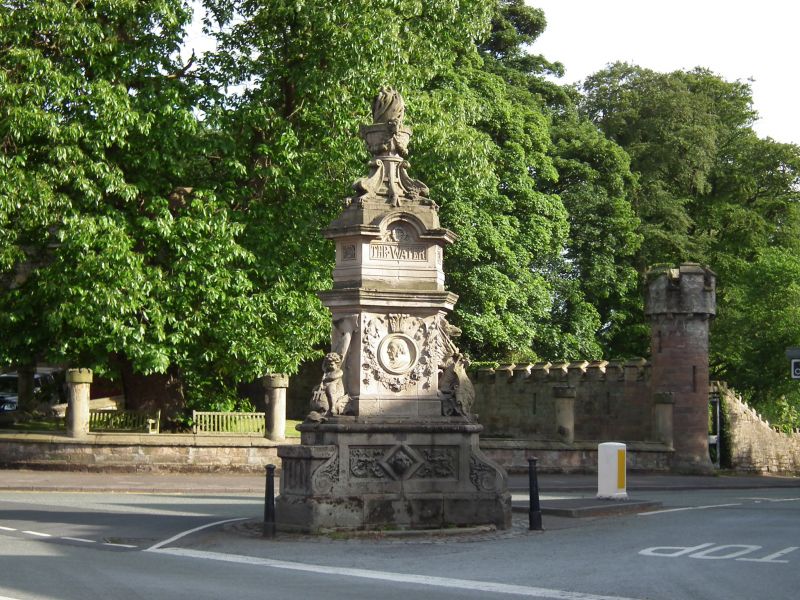 Location: At the cross-roads, and situated in the centre of the road.

Erected by the people of Hawarden to commemorate the golden wedding of William and Catherine Gladstone in 1889. It was unveiled on 29 December 1890, the former's 81st birthday. Designed and sculpted by Edward Griffith of Chester after a public competition.

Catherine Glynne (1812-1900) was born in Flintshire the daughter of Sir Stephen Glynne, 8th baronet and Mary Aldworth-Neville. She married William Gladstone in 1839 and they lived at Hawarden castle which had been owned by her family since 1654. She was a philanthropist and established orphanages and convalescent homes in response to the 1866 cholera outbreak in London. In 1887 she became the first President of the Women’s Liberal Federation, but resigned in 1892 when the Federation voted to support women’s suffrage, which her husband opposed.

William Gladstone (1808-1898) was a Member of the UK Parliament from 1832 to 1894 and served as Prime Minister for twelve years. He is the only Prime Minister to have served four terms. He was born in Liverpool the son of John Gladstone (1764-1851), a sugar merchant and plantation owner who was one of the largest owners of enslaved people in Britain’s colonies of Guiana and Jamaica. He entered Parliament in 1833, aged 23. At this time he supported emancipation but argued for apprenticeships to be served before enslaved persons were freed, and for the financial compensation of slave-owners (his father received the largest individual payment as the owner of 2508 slaves). By 1850, Gladstone described slavery as “‘by far the foulest crime that taints the history of mankind” and he used import taxes on slave-produced sugar to encourage other countries to abolish it. He also opposed the lucrative opium trade and objected to Britain’s Opium Wars against China. One of the great reforming Prime Ministers of Victorian Britain, Gladstone created the secret ballot, legalised trade unions and extended voting rights so that the majority of adult men were allowed to vote in Parliamentary elections. He passed the Elementary Education Act in 1870 and presided over important reforms of the army and the civil service. Gladstone was hostile to British Imperialism in Africa and Asia but nonetheless began the military occupation of Egypt in 1882. He saw political devolution as a peaceful way to keep Ireland within the British Empire but his attempts to establish Irish Home Rule were defeated. In Wales his governments passed the Welsh Sunday Closing Act in 1881 forcing pubs in Wales to close on Sundays (except in Monmouthshire) and created the University of Wales in 1893. In 1873 in Mold he was the first UK Prime Minister to address the National Eisteddfod.

3-sided stone fountain in municipal Renaissance style with a dedication plaque in the S face. Relief portraits of Gladstone and his wife in roundels, in W and E faces respectively. Swagged surrounds. Classical flaming urn finial. The upper half of each face has the inscription Drink ye... the water... of life respectively, under arched cornices. Base with moulded plinth and scrolled corners. Above these are, N, a sculpted, armed putto sitting astride a dolphin, and at the other corners griffins bearing the arms of the Glynnes and the Gladstones. Acanthas decoration to lower sections with central lozenges containing lion's heads.

The fountain is now disused.

Included for its special architectural interest as a notable public memorial, and for its special historic interest in commemorating a prominent statesman. It makes a striking contribution to the village-scape.