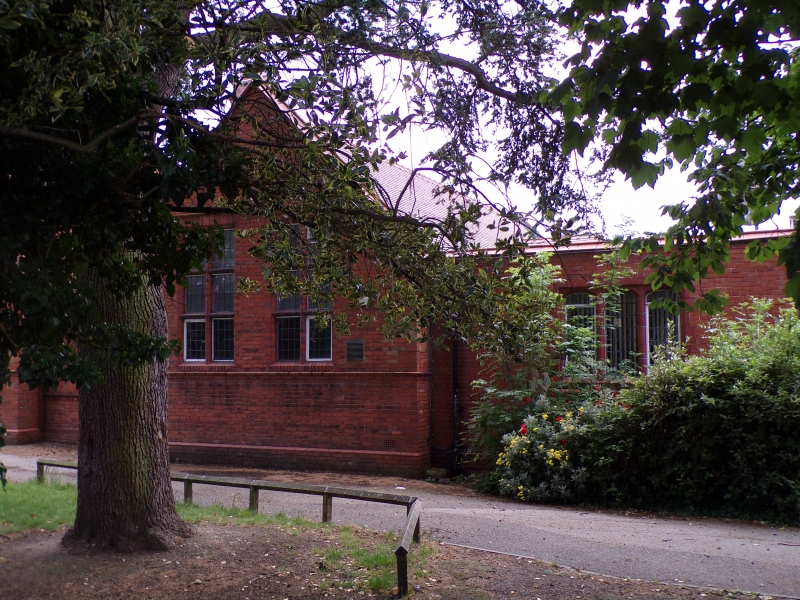 Location: Set back slightly from the road, behind a railed, grassed forecourt.

Established under the Welsh Intermediate Education Act of 1889, the former Hawarden County School was opened in 1898 as the fifth of its kind in Flintshire. The 4 other schools established were at Rhyl, St.Asaph, Mold and Holywell. The school was designed to accomodate 54 boys and 44 girls. By Grayson and Ould of Liverpool and built by W. and T. Bailey of Hawarden at a cost of ú2,450. In 1905 an amendment to the act necessitated the provision of boarding accomodation, and additions to the W, dated to that year, relate to this.

Central (now library) block: Show-piece facade in restrained Tudor style. Ruabon brick with terracotta detailing. 3 single-storey gabled sections symmetrically conceived, under a steep-pitched tiled roof with plain eaves and end chimneys. Large central gable, coped and finialed, with a fine inset heraldic plaque with returned label. Lead cupola with tiled fleche and wooden ball finial. 27-light mullioned and transomed window of 3x9 lights, separated by 2 blind vertical sets. Ovolo-moulded jambs with arched-headed lights across centre. Flanking this are 6-light mullioned and transomed windows with arched-headed lights, themselves flanked by buttresses, the end ones clasped. These with decorative fleurs-de-lis gablets. Flanking L-shaped wings with advanced tile-coped gables. Paired 6-light windows as before, with flat heads. 3-light windows to recessed connecting bays, that to the R with a stack as before. To the L of the main block, and set back
a parapetted porch with pointed-arched entrance and returned label. To the S (rear) a contemporary series of plain gabled ranges forming a rough E-plan. Simply moulded chimneys and large 6-12
light windows.

To the R of the Library block and stepped down, a flat-roofed single-storey connecting range with 3-light arched-headed windows. Stepped back from this and adjoining to the R a 5-bay single-storey block with 3 plain buttresses to the first and second bays from L. 2 and 3-light arched-headed windows. Entrances to bays 1 and 4, the latter with lugged surround, ovolo moulded and stopped. Date 1905 in raised lettering on lintel. 6-panelled doors. Plain string course and a plain off-centre stack. block to the E.

Included as a finely detailed and relatively unaltered example of a school designed by an important team of regional architects.