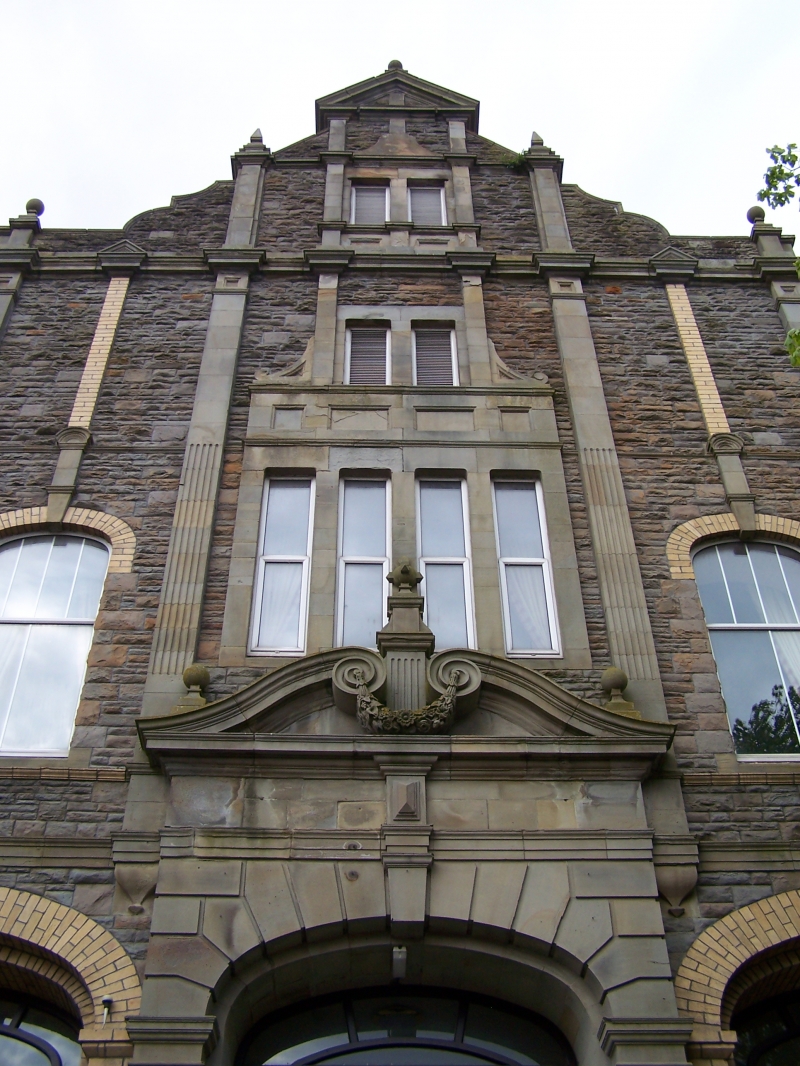 Location: Prominently situated at the junction between Church Road and High Street, set back behind railings.

Dated 1894; the foundation stone was laid in 1893 and it was opened in 1895. Designed by Newport architect, E A Lansdowne and built by local builder John Morgan at a cost of ú10,000. This was largely paid for through a subscription of 1/2d per week by the workers, who also contributed much voluntary building work. The building became a focal point for the mining community.

Two storey building with attic, on a rectangular plan with projections to north, including the caretaker's cottage. Snecked stone construction, with mixture of stone and yellow brick dressings. Eclectic detailing on all facades.

East Facade:- Broad symmetrical five-bay front with large pedimented gable. Stone plinth and a series of string courses at ground and first floor levels; pilaster strips above. Flight of steps lead to main entrance with three segmental arched openings, the central one of which has stone surround with scrolled pediment finials. First floor has rectangular, four-light window with stone dressings, running into smaller two-light window above. Flanked by windows with segmental brick arches and brick pilaster strips springing from the keystones. Decorated string course marks the attic level in the gable, with single, two-light rectangular window. Pilasters in brick and stone link upper floor levels and windows. On the outer two bays, ground and first floor windows are set into a tall yellow brickwork panel. Paired lights to ground floor with a hood mould, angled stone sill and panelled apron. The first floor two-light window has a segmental arch with hood moulding, angled stone sill and upper part inset with stone panelling. Above this at either end, a stone dressed, corbelled out attic window, with two lights, is surmounted by a similarly scrolled pediment with finial.

South Facade:- This has six bays on two storeys with attics in the two advanced end bays. The elevation has a stone plinth with brick chamfer and five string courses. Fourteen diaper panels of moulded yellow brick run horizontally through the centre of the facade. Short pilasters run through the gables. Windows have shallow brick arch with ceramic hood moulding continuous with a string course. Pedimented gables with finials to advanced bays and central two bays.

West facade:- This has a large pedimented gable with finial. Below is a large blind arcade framing a stone panel inscribed with the name and date of the building and decorated with shell motif. Doorway at south corner approached by flight of steps.

Listed as a good example of a Working Men's Institute and for its historical associations with this important industrial community.