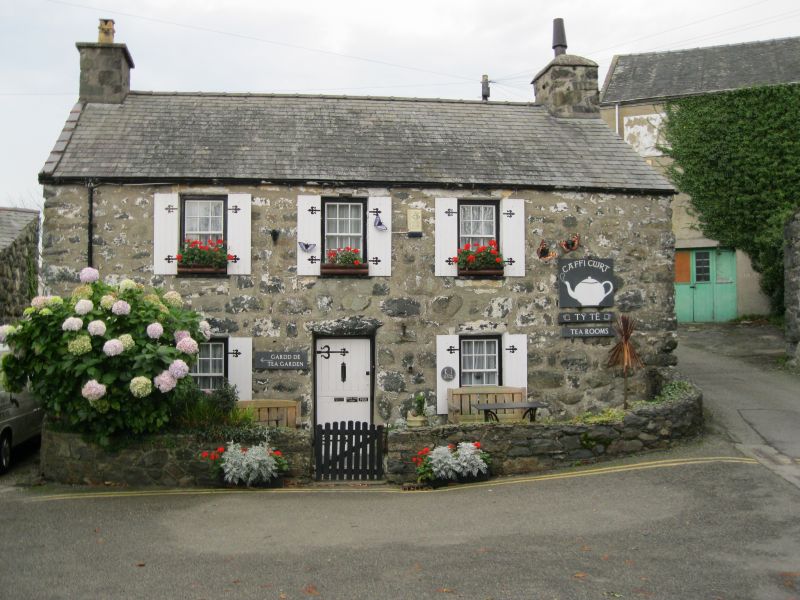 Location: To the South of Stryd Fawr set back on the W side of the open space of Y Maes.

Probably originally built as a one and a half storeyed dwelling in the C17 (although the first documentary reference to a house here comes in a deed of 1742), and raised in height, probably in the late C18 or early C19. The internal arrangements was modified at some time, perhaps when the roof height was raised, and now comprises 2 small rooms with a central entrance and stair hall. The position of the axial beams (close to the partition walls which divide the hall from the 2 rooms) suggests that the original form was a 2-unit dwelling with no central hall. The house is reputed to have housed the Court of Petty Sessions which was based in Criccieth until its transfer to Tremadoc in 1825, and was listed as a small farm in the Tithe Survey of 1839.

Roughly coursed rubble with recent slate roof with end wall stacks. Doorway to left of centre, with the 3 upper windows aligned with the entrance and its flanking windows. All windows are now 2-pane sashes (but were formerly sashes of 12-panes), and all openings have rough stone lintels. In the gable walls, the profiles of the earlier roof line are visible.

A single small room to either side of the central entrance and stair hall. Roughly chamfered axial beams in each room, but otherwise few early features remain. Staircase inserted, probably in the early C19 (and since reconstructed), but it is possible that the building originally had a staircase alongside the principal fireplace.

A good example of a small vernacular house which displays a typical development pattern in its enlargement from a one and a half storeyed building to one with 2 full storeys.