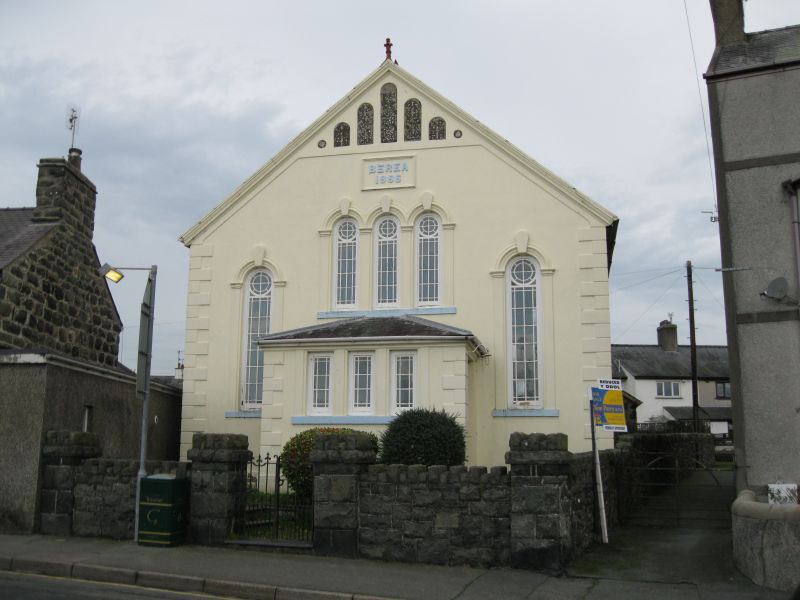 Location: Prominently sited towards the N end of the terrace.

The chapel was established when the congregation of the old chapel of Pen y Maes moved in 1886. This church had been a Scotch Baptist congregation, but had broken away to become followers of Alexander Campbell - the Disciples of Christ - in 1841. It joined the mainstream Baptists in 1939. The church had a strong connection with the family of Lloyd George, whose uncle was a minister when Capel Berea was opened. Lloyd George and his family worshipped in the chapel, and he retained important links with it throughout his life.

A simply planned building, with decorative detail confined to the gabled front facing the street. Smooth rendered walls, with raised moulded plaster and some roughcast dressings, and slate roof with red tiled cresting. Entrance front has central projecting lean-to porch with doorway in moulded architrave facing N, and 3-light window in its front wall. To either side of it are tall round-arched windows in moulded architraves with capitals and keystones, margin lights and circular glazing in the heads. 3 similar lower windows form a band above the porch. Over these is a panel bearing the chapel’s name and date in raised lettering, and the gable apex is detailed by an arcade of stepped blind arches in plaster work with roughcast infill. The chapel is of 4 bays, each with round-arched window, with lower school room to rear.

A simple, single space. The internal walls have lined out plaster finish above tongue and groove dado panelling; coved plaster ceiling, with deep moulding surrounding boarded central panels which contain enriched plaster rosettes. Original pews, including benches lining the walls. 2 outer aisles. Reeded pilasters to moulded arch with panelled tympanum at W end above dais, with chamfered oak doors to schoolroom etc. Beyond. Baptistery beneath floor of dais. Central lectern on platform, but no set fawr, because the chapel had no deacons.

Significant as an unusual and well-preserved example of a chapel purpose-built for a small and rare denomination. The chapel is also of special historical interest for its associations with Lloyd George.