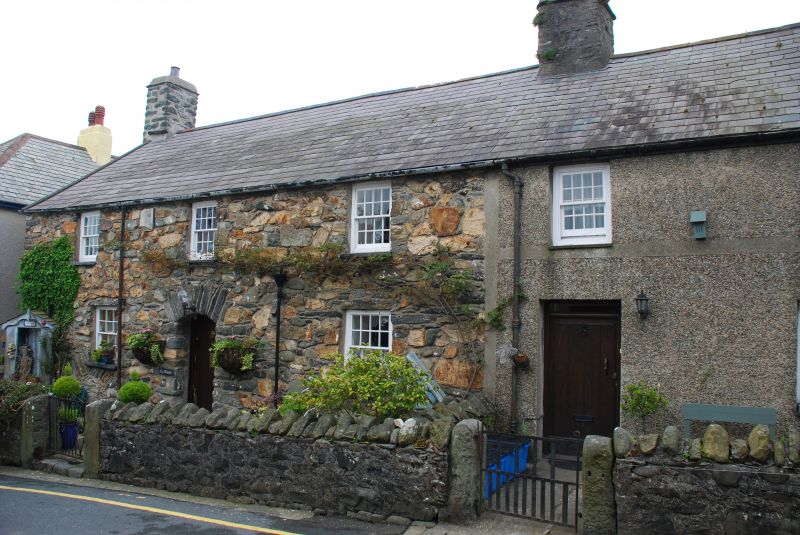 Location: In a continuously built-up terrace, opposite and above the junction with Tanygrisiau Terrace.

A late C16 house, with later alterations including insertion of windows at some time in the C18 and remodelling of internal layout to create a central stair hall. At one time in use as a public house.

Roughly coursed boulder stones and slate rubble, with recent slate roof. End wall stacks, that to left corbelled out at first floor level. 2 storeys, 3 window range, with entrance towards centre. Steep voussoir arched head to doorway, which is flanked by 16-pane sash windows with flat lintels. The 3 upper windows are similar, and align with the lower openings. Cellar opening (formerly a doorway) cut by left hand window, has steep voussoir arched head, similar to that of main doorway.

The house originally had an inside cross-passage plan, and the opposed entrances of this survive, together with the heavy post and panel partition wall, now separating the living room from the stairway. The original layout had a large and a small room on each floor, placed alternatively. The present internal layout is in part the result of later changes, and especially the insertion of a central staircase (perhaps in the late C18). The fireplace in the present living room is probably a C18 insertion, the earlier fireplace in the W room has been blocked, and the original staircase alongside it largely removed. A 3-bay roof with arch-braced collar beam and cusped wind braces to one truss is recorded by RCAHM.

An important example of an early storeyed vernacular building in the centre of the town which has retained many of its original features.