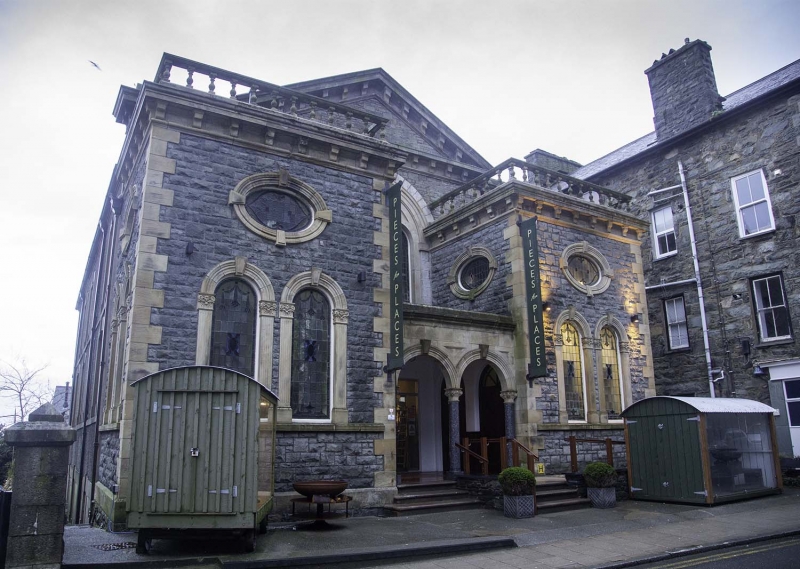 Location: Situated prominently on the street-line.

A mid-Victorian 5-bay rectangular chapel with show-piece facade
in eclectic Classical style. Built 1866 as the Caersalem Calvinistic chapel at a cost of ú2,300; alterations c.1900. Snecked dressed stone with sandstone detailing; medium-pitched slate roof.
Symmetrical facade with large bracketed pediment and a 2-light, round- arched window with blind oculus and spandrels. This is contained within a large round-headed arch with simply-moulded entablature, plain projecting key and pilasters. In front of the pedimented facade, storeyed porches were added C1900. These have their entrances on the inner return walls. On the street-facing sides they have sandstone quoins and twin arched windows (that to the far R now blocked), with fluted pilasters projecting keys and composite capitals. Above these are single eliptical oculi with 4 projecting keys. Moulded and bracketed cornices with surmounting balustrades with bulbous turned balusters and moulded rail; plain cill course. The fenestration and balustrading is repeated on the outer return walls and the oculi appear also on the inner returns. The porches have slated pyramidal roofs with simple lead finials. They are linked in the centre by a slightly recessed double-arched loggia, balustraded as before and with moulded voussoirs, projecting keys and composite capitals surmounting black marble columns. Stepped access.

Wooden gallery supported on fluted iron columns with stiff- leafed capitals and foliate brackets. The gallery face has raised and carved panels and columns and a dentilated cornice. Dentilated cornice to ceiling with large, complex plaster decoration of geometrical and foliate forms.

A good, finely-detailed chapel retaining much of the contemporary interior in a prominent position on the High Street.

Group value with other listed items on the High Street.