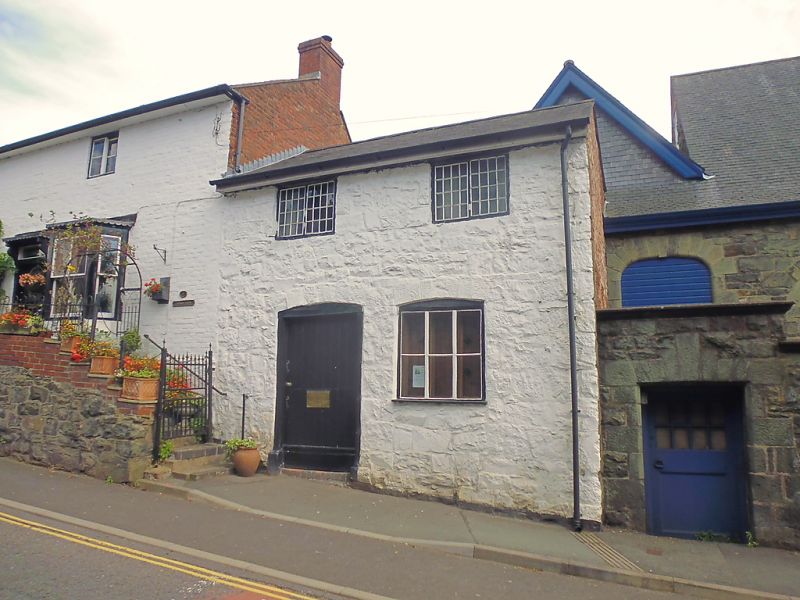 Location: Above the level of the road, opposite the Church of Saint Mary.

History: Nos 1-2 appear to represent a single build, and the exposed timber framing in the rear of No 1 suggests a late C16 or early C17 building date, with a frontage which is probably late C18. The former cooper's shop is probably early C19 and the workshops are late C19.

Exterior: The houses are painted brick, slate roof with single gable end stack, and rear wall stack. 2 storeys, No 1 is a 2-unit plan, with doorway towards centre: a 6-panelled door with overlight and shallow canopy hood to architrave, flanked by canted bay windows of late C19 type, with 4-pane sash windows. Small 2-light casement windows immediately below the eaves. No 2 is single unit plan, with doorway to right, and camber-headed window alongside, with mullioned and transomed glazing. 3-light casement window below the eaves. Heavy square panelled box framing exposed in rear elevation. Former cooper's shop adjoins No 1 to the right, at a lower level. Rough local rubble, with brick dressings, all painted. Slate roof. Wide doorway to the left, and 3-light workshop window to its right, both with cambered heads. 2 small-paned iron casement windows immediately below the eaves. The coopers' workshops from a wing to the rear of the shop: single storeyed sheds of light timber framing with plank cladding.

The buildings form a group and are of special interest not only for the vernacular character and early origins of the houses, but also for the exceptional survival of the cooper's shop and associated workshops: these form a remarkably complete group of considerable historical interest.