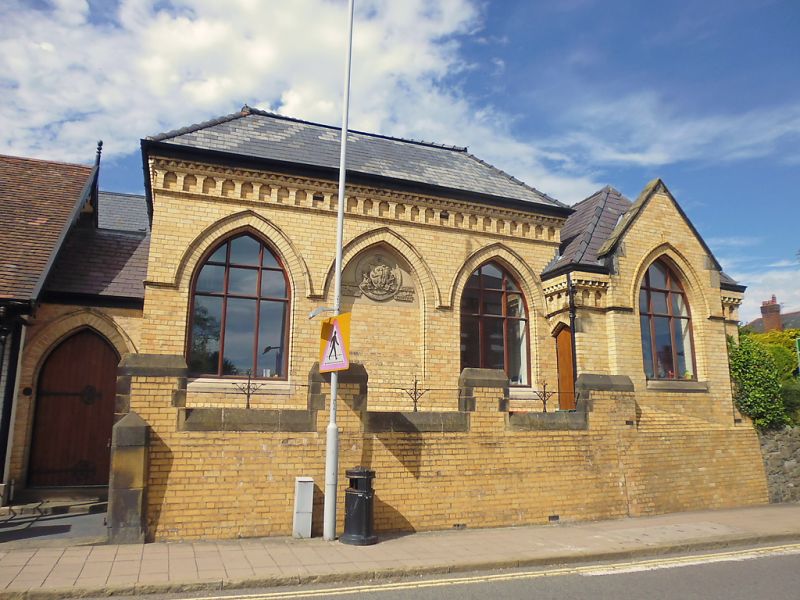 Location: Built around 2 sides of No 1 Salop Road, with the museum facing Salop Road, and the library facing onto Red Bank.

History: The Powysland Club was founded in 1867, 'for the collecting and printing (for the use of its members) of the Historical, Ecclesiastical, Genealogical, Topographical and Literary Remains of Montgomeryshire'. It acquired this site in 1873, and the museum was opened in 1874, designed by David Walker of Liverpool; it was extended in accordance with the original design in 1880. The museum was one of a very small number of similar establishments in Wales, and entertained hopes for a time of becoming a general, central museum of Welsh antiquities. From the outset it was also intended that there should not only be a public library and museum, but that there should also be a school of science and art, in association with the science and art department of the Committee on Education, South Kensington, and a School of Art was opened in 1883 (in premises to the rear of the Museum). The public library and reading room on Red Bank was added when the museum was handed over to the Corporation of Welshpool in 1887. The buildings were taken over by Powys County Council in 1974, and the collection moved to other premises in 1990.

Interior: Museum is a simple rectangular top-lit space with 2 arched braced trusses. Lower wing has scissor-braced roof. From the main entrance, a corridor with steps connects the museum with the 2 library buildings to the rear of the site, via a gallery at the rear of the lower of the two range.

When it was established, the museum was one of only 4 or 5 other museums of its kind in Wales, and was considered to be possibly the most valuable in the principality. The buildings are a remarkable testimony to the importance of the Powysland Club, and represent an excellent example of small-scale, highly specialised building design.