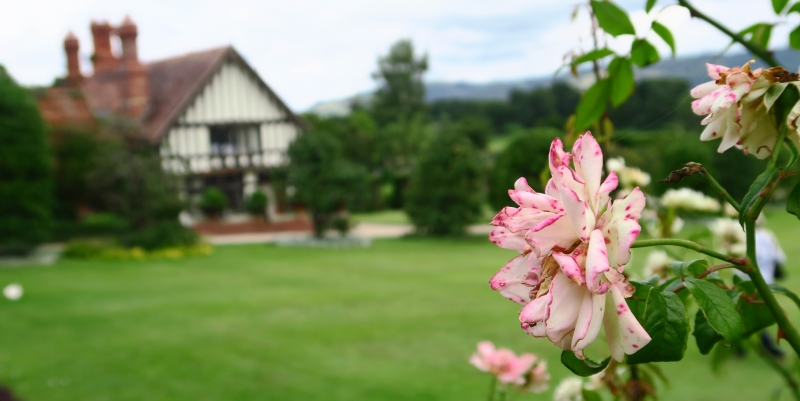 Location: On the W side of Dairy Square, NE of the castle, and overlooking the Formal Garden. The wall to the rear of the house forms the NE boundary of the fo

Exterior: The house is timber framed on a brick plinth with stone copings. It has red tiled roof, and brick and terracotta star-shaped stacks to gable end and rear. Close-studded pegged framing, with decorative quatrefoil panels flanking the windows, and curved tension braces at angles. Entered via a single storeyed porch with steep chamfered archway from Dairy Square, its principle elevations overlook the garden. S elevation is 2 storeyed, a 2-window range, with balustraded and arcaded loggia entrance (now partially filled-in) to the right. Wide gables with pierced trefoils in bargeboards over windows: left hand bay has single lights to ground floor and canted oriel window above; full-height canted bay window beneath right-hand gable with transoms to lower lights. All windows have chamfered mullions and leaded lights. W gable end has jettied upper storey carried on finely moulded brackets: 4-centred archway to recessed porch to left (with similarly arched panelled inner door), and canted bay window with mullioned and transomed lights alongside. 4-light mullioned window with quatrefoil panelled apron to first floor. NE rear wing is partially rubble and is probably of earlier date.

A high brick wall with stone copings forms the W boundary of a yard to the rear of the house. Against it is a range of timber-framed outbuildings, which are probably C18. The cross- range to the rear of this yard is brick with stone dressings: louvred vents in plain tiled roof. Paired doorways towards left and a series of mullioned windows with hood moulds.

The bothy is a very good example of the Neo-Vernacular 'Old English' style of Edwardian building, which makes a strong contribution to the character of the formal garden, laid out in 1912.