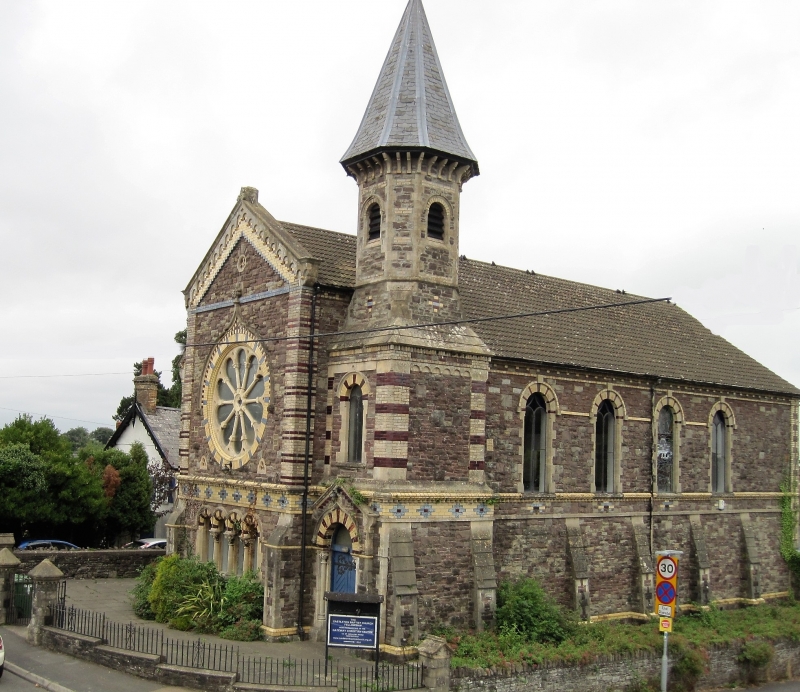 Location: Prominently located on corner of the A48 and Marshfield Road. Front is bounded by a dwarf wall with railings and pyramidal capped piers with dentil cornices; low rubble wall to side.

Erected in 1859 and designed by R G Thomas, architect. It is an early example of the Italianate-style chapel facade later developed by George Morgan. Built at a cost of £2,000, the funds for which are said to have been raised by an open-air rally held in Marshfield in 1858 by the famous English non-conformist Charles Haddon Spurgeon.

Eclectic chapel facade in Italianate manner with distinctive rose window and fine polychromatic detailing in cream, blue and red brick. The chapel is constructed of red sandstone and limestone blocks. Clay-tiled gabled roof with bell-tower and spire to NW corner. Central bay of N elevation breaks forward with large rose window with blue and cream striped brickwork surround and ogee-hoodmould with fleur-de-lys finial; two trefoil vents below and similar quatrefoil to gable apex. This central bay has red and cream banded end pilaster strips beneath a blue brick bandcourse and continuous arcading to the gable in Italian Romanesque manner. Below the rose window is a blue and cream diaper pattern frieze over the four vestibule windows with continuous, round-headed, banded arches and foliated capitals. The entrances are set back to either side with similarly banded end pilaster strips and round-arched doorways with nookshafts, ogee hoodmoulds and gabled coping; boarded doors with decorative ironwork. Continuous impost band across front and 2-light windows above both entrances. To right (NW corner) is a polygonal belltower, broached at the base and surmounted by a deeply bracketed slate spire. Four-window, buttressed, side elevations with coloured brick reserved only for the banding of the round-headed windows. Former organ chamber projects at south end (rear) with capped chimney; small rose window and attached school hall and boiler house.

Listed as a distinctive and well detailed example of a mid C19 chapel.