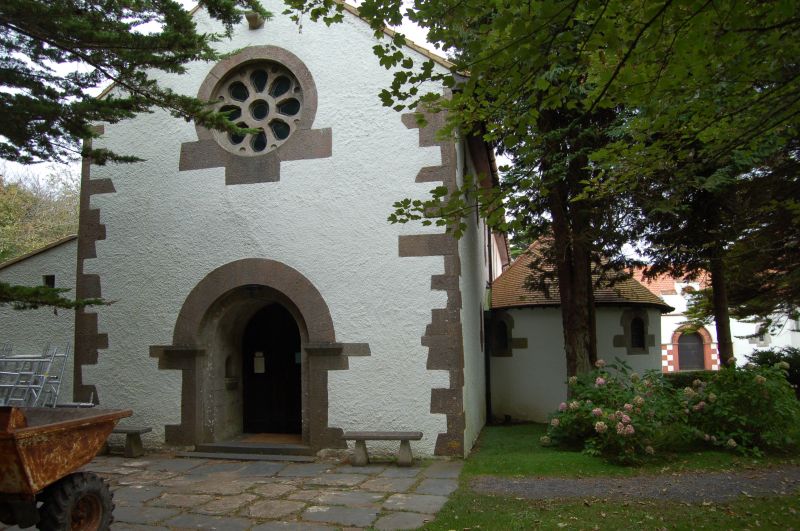 Location: On hillside above the village, about 500m SE of the harbour.

Roman Catholic abbey built 1910-15 to designs by John Coates Carter of Cardiff. Built for the first ever community of Anglican monks, established in 1896 by B F Carlyle, who took the name Dom Aelred. The community followed the Benedictine rule, and was backed by the 'high church' or Anglo-Catholic wing of the Church of England. It first came to Caldey in 1901-2, invited by the owner, the Rev W D Bushell, but left for lack of funds. Support from leading Anglo-Catholics allowed the purchase of the island in 1906, and then began a small programme of building, but one with very ambitious intentions A first cottage-scale temporary range was eventually incorporated into the present quadrangular monastery, itself intended to become a boys preparatory school when a much larger monastery should be built on the higher ground to the SW. In the event the sequence of building was more piecemeal and stopped in 1913 when the monks were received into the Roman church, after the Anglican authorities took alarm at the increasingly elaborate rituals practised by the community. £68,014 17s10d (£68,014.89) was estimated to have spent by 1913, including buying the island. Rising debts led to the community being moved to Prinknash, Gloucestershire in 1928, and the island was purchased by the Reformed Cistercian community of Chimay, Belgium. A fire on September 25, 1940 destroyed the older cottage part of the monastery (S range of cloister) and gutted the Abbey church, which was restored in 1951. The Monastery was raised to the status of Abbey in 1959.
The sequence of building was that a row of cottages was built in 1907, to be used temporarily by the community. A chapel (the present abbey church) was added on the E end in 1909-10, and quickly filled with elaborate fittings, although still intended to be temporary. It was then decided to extend this S range into a quadrangular monastery. In 1910 the chapter house and statio (assembly room) were added to the chapel, and the abbot's house begun to the W. The plans for the E, W and N ranges, drawn up in 1911, were broadly completed, around a cloister. The W range had the refectory with NW kitchen tower over bakery and laundry. A near-detached private chapel for the abbot was added in the angle between the W range and the abbot's house. The N range had two floors of monks' cells, ground floor offices and washroom, and basement workshops, with NE corner block of library, teaching and study rooms. This block was simplified in execution for lack of funds. The E range was most simplified for lack of funds. Intended to have had a complex of guest rooms E of the cloister, only an entrance facade into the cloister was built, with lawns where the guest rooms were to have been. Work finished around 1915.
The elaborate fittings were either removed in 1928 or lost in the 1940 fire. Small items survive at Prinknash and elsewhere. The cottage range W of the chapel was never rebuilt after the fire, the front wall remains as the rear wall of the S cloister. The roofs were retiled in 2000-1 and some lost features restored, under Peter Holden, architect.
The buildings represent the most important complex of buildings built in Wales influenced by the Arts and Crafts movement of the early C20.

Graded II* as striking complex of buildings with high quality architectural detailing and massing in a unique location.