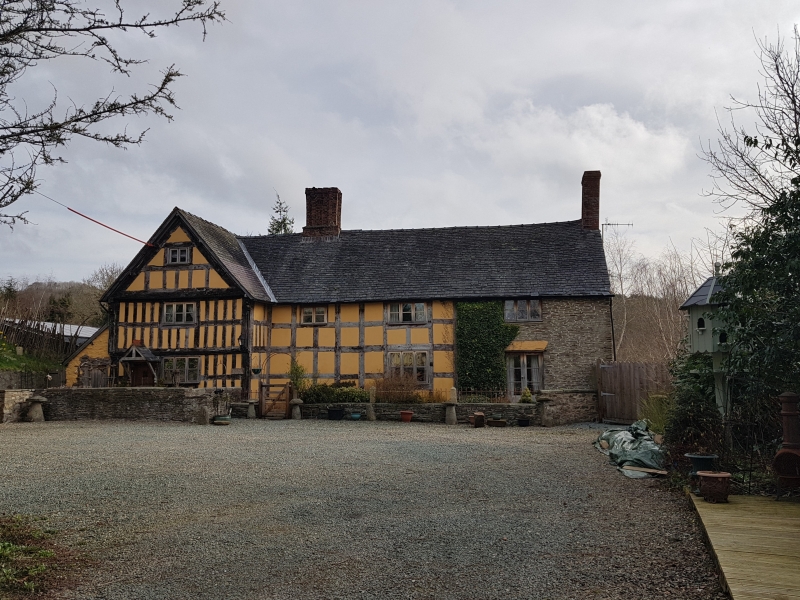 Location: Situated on the SE side of Hyssington village, and reached by a short farm road. The house faces W on to the farm yard.

Probably early C17, with extension to S added in the C18.

Main range and cross-wing, the main range extended by a single bay to the S; outshut and gabled projection at rear. Roof of clay tiles on E side, slate on W side. Main range has axial brick stack with star-shaped flues. Main range now roughcast, but probably timber framed, with 2 casement windows under the wall plate, and a single small-paned casement in the lower storey. C20 door under projecting flat hood. Cross-wing is timber framed with close studding, a moulded girding beam, and with square panels above tie beam. Tie beam is jettied, with moulded soffit and supported on moulded brackets. Replaced casements in earlier openings in gable, and in the upper and lower storeys. C20 door with projecting flat hood. N wall of cross-wing roughcast, with lean-to in random rubble, which has corrugated metal roof and brick stack. Timber framing of rear wall of cross-wing largely renewed, or rebuilt in brick painted black to imitate timber. Replaced casement window in gable, and inserted casements in upper and lower storeys. Outshut roughcast on a stone platform, with lately inserted door. Gabled wing at rear is 2 storey with slate roof and end brick stack. On the S side an iron-framed casement window under wall plate, and an iron-framed casement in the lower storey under a stone segmental head. Extension of main range to S has end brick stack. In the front iron-framed casement under wall plate and double glazed doors under a wedge lintel. Rear wall roughcast.

Listed for preserving the overall integrity of a C17 - C18 house, and for the high quality timber framing of its cross-wing.