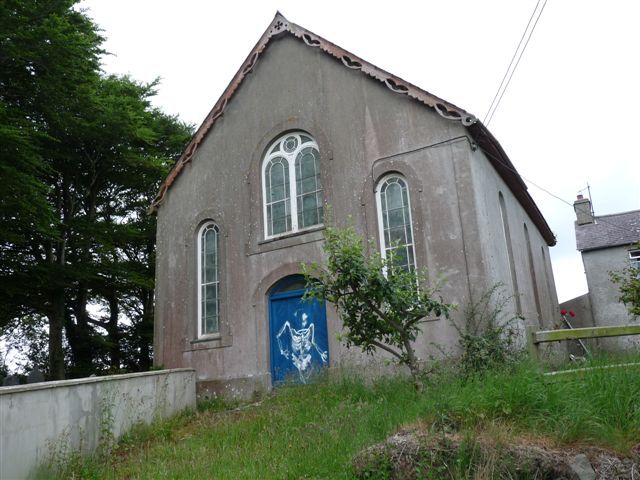 Location: Situated on the S side of the Aeron valley, approximately 2.5 km SE of Aberaeron and on a minor road S of the A4687.

1906, Independent chapel, probably by David Davies of Penrhiwllan. An historically important congregation formed before 1746 from Ciliau Aeron. Became Methodist when Ciliau Aeron became Unitarian. Congregation grew fast especially under Rev. Thomas Phillips (1772-1842), minister from 1796. During his time, in 1818, missionaries were sent to Madagascar, among the first missionaries to that country. The chapel was rebuilt several times bewtween about 1760 and 1906.

Unpainted stucco with slate roof. Gable front of Venetian arrangement (derived from Seion, Llandysul by the Rev T. Thomas of 1870), that is four pilasters and a centre arch reaching into a pedimental gable. Windows have raised surrounds with shoulders and keystones as does small matching plaque under arch. Two small windows over door in centre, two long outer windows with two-light tracery and roundel in head. Double doors with crescent overlight in pilastered surround with moulded arch and keystone. Plain sides with three long arched windows, simple centre mullion glazing.

Included principally for historic interest and group value with monument and attached row of houses behind.