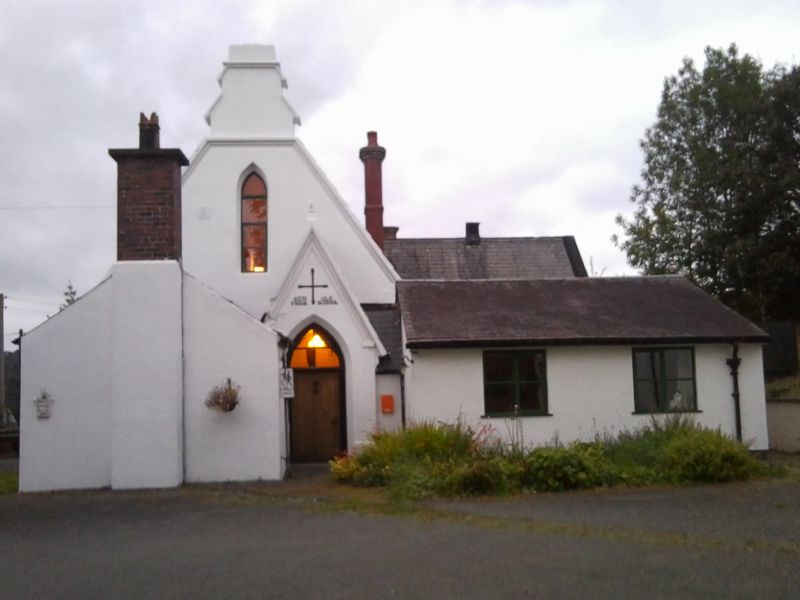 Location: Located 50m SW of parish church at a junction of 2 minor roads opposite Church House Farm. Set within a playground walled in concrete on the S and E sides and bounded by the School House on the W sid

The school, with adjacent schoolmaster's house, was built in 1871 and replaced an earlier school in the village. Constructed in unreinforced concrete by Henry Hanbury-Tracy as part of the Gregynog Estate. Hanbury-Tracy's use of the material on the Gregynog Estate was intended to demonstrate the benefits of building in concrete, which it was claimed reduced the cost of a building by a half compared to brick or stone. The concrete was made from river gravel and brick fragments bonded with cement. It was laid in wet courses directly on to the wall using timber shuttering and finished with a skim coat of render. Concrete was also used for mullions, roof slabs, chimneys and fireplace. The school closed in 1995.

The building faces E to the playground and consists of a large classroom in Tudor-Gothic style and a smaller N classroom at right angles behind. There is an entrance porch, with an added lobby at the rear. Rendered concrete painted white, with slate roofs. The main range has a 4-bay S elevation with stepped buttresses and 2-light windows. The E elevation has a coped gable with the base of a bellcote on the ridge. Below is a single lancet window. The porch is offset to the R and has a cross moulded in concrete and Tregynon School in black painted letters. The doorway has a pointed arch. (Attached to the porch are C20 additions to L and R.) The W elevation has a 3-light window, now boarded up, under a lancet arch. The lower N classroom has a tall concrete stack with paired octagonal shafts and moulded cap. On the N side are stepped 2-light windows; on the W side is a former 3-light window converted to a door (to the E is a C20 addition).

The main classroom has a concrete fireplace with a raking hood, concrete corbels supporting an arch-braced roof, and splayed window reveals; in the smaller room is a plainer fireplace with concrete overmantle. The doorways have chamfered surrounds and boarded doors. In the porch concrete roof slabs can be seen beneath the slates.

Listed as a C19 school in typical Gothic style but especially notable for its experimental use of unreinforced concrete, and for group value with the adjacent Boundary Wall and School House. The building also forms an important component of the surviving group of concrete buildings in Tregynon.