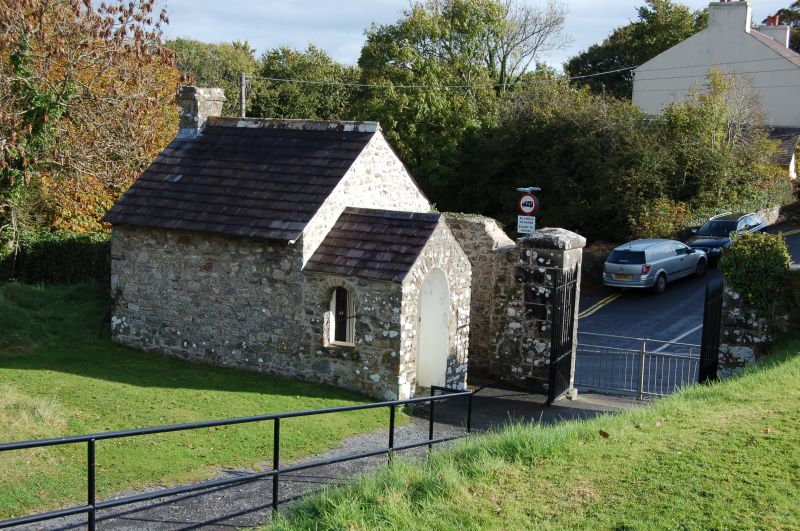 Location: At the entrance to Carew Castle, nearly opposite to the Carew Inn.

Probably both late C19. The 1865 O S map shows the path giving access to the Castle grounds from Carew village was already in its present position, and it is known that access was already restricted with locked gates. When P H Gosse visited in 1861 a local villager had to be sent for to bring the key. By the end of the century, however, it appears admissions had been organised on a more regular basis; a Guide of 1896 indicates that visitors were admitted at 3d a head. It is clear that the cobbler's shop, standing beside the access path with a porch facing it, was also the admissions kiosk. It is marked, complete with porch, on the 1907 O S Map.

Local recollections confirm that the building was used early in the present century by a local cobbler, David Phillips, who was also employed to control admissions to the Castle. Its original interior fittings do not survive. The building has been restored and is now used by the National Park Authority as a private office for the custodian of the Castle. It was recently re-roofed using slates from the nearby chapel.

Single-room building about 3.5 m square, of limestone rubble masonry, rendered. Roof of thin slates with roll-top ridge tiles. The roof is aligned N/S. A small window faces E to the street, and the door, with an open-fronted porch with a two centred arch, faces S to the access path.
Linked to the shop is a pair of gatepiers in hammer-dressed masonry with a single-stone weathered stone coping each side. The gates have been replaced.

Listed for social history interest as village cobbler's shop and an interesting feature of early tourism and also for group value with the Castle and the village.