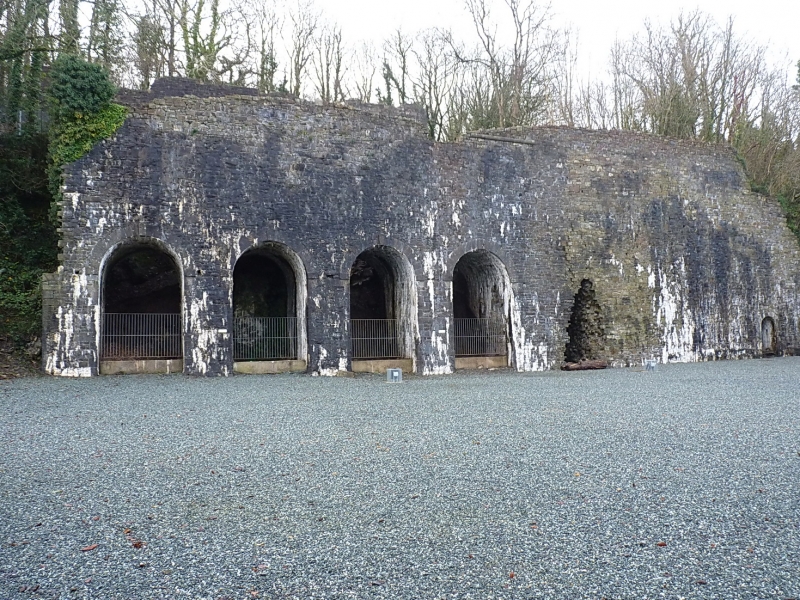 Location: Kilgetty Ironworks is at the W side of Pleasant Valley. The furnace bank is a high retaining structure about 20 m W of the Ironworks casting shed.

Kilgetty Ironworks was planned from 1846 by the Pembrokeshire Coal and Iron Company. Four, or possibly six, furnaces were anticipated. The works commenced production in 1849 with two furnaces, only one of which was then brought into blast. A year later production was halted due to an explosion. Grove Colliery was opened in 1856 to supply coal. Success was only moderate, and by 1861 the Company was in difficulties; in 1863 it was acquired by C H Vickerman and a brief period of prosperity commenced. In this heyday the works were pictured by M S Whatley. The furnaces were blown out in 1867, and Vickerman contemplated selling. For this purpose an inventory of the works was drawn up in 1872; James Carlton and the Bonville's Court Coal and Iron Company purchased them and brought in new investment. In 1873 a furnace was again in blast, but was blown out again a year later at a time of trade depression. The new owners went into liquidation in 1876 and the works closed in 1877. Vickerman, the main creditor, was able to buy the works back at a modest price. In 1888-9 the plant was dismantled and sold, but the buildings remained in workshop or storage use.

A limestone retaining structure of about 15 m height in good quality masonry, standing in front of a near-vertical quarried rockface. At the base of the wall opposite to the furnaces there are four blind vaulted spaces of considerable size. The keystones and imposts of these arches are slightly emphasised. The wall continues for a short distance to the S and for a greater distance to the N, past the site of the engine house. Where it returns at the N side there is a vaulted space with a flue, reached from the adjacent bank.

Listed as the furnace bank revetment wall of Kilgetty Ironworks, an essential part of a remarkable surviving industrial group.