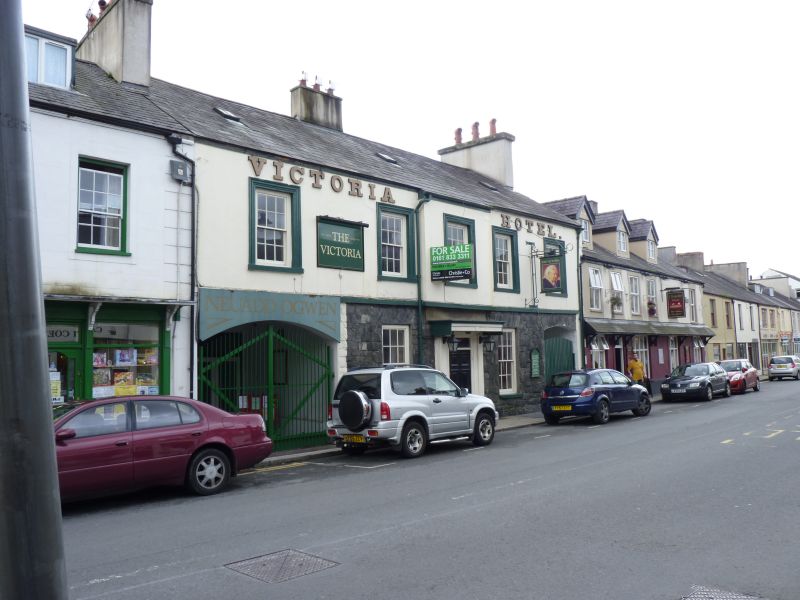 Location: Situated NW of centre of Bethesda some 200m NW of Capel Bethesda in terraced row.

Earlier to mid C19 public house, possibly incorporating work of c1800, as the inn fronts the modern Neuadd Ogwen which replaces the old Market Hall. Thomas Pennant recorded in 1796 that Lord Penrhyn had built a market hall but also that 'no corrupting ale-house is permitted'.

Rubble stone and painted stucco with slate roof, and three rendered stacks, one each end and another axial on ridge. Two-storey, five-window range, the centre bay projecting slightly, and the two-bay wings although matching in detail have different window spacing. First floor is stuccoed, and ground floor probably was originally. First floor has 5 hornless 12-pane sashes in moulded stucco surrounds. The words VICTORIA and HOTEL are in large Victorian capitals each side of centre. Raised band over ground floor broken forward at centre bay. Ground floor does not have centre break. Centre 6-panel door with overlight in timber surround of pilasters and overhanging corniced flat hood. 12-pane sash each side with lintels of a single slab of stone. Outer bays have broad cambered arches, presumably coach-entries, that to right with stone voussoirs, a through-way to rear of building, that to left has C20 cladding over arch and forms porch to modern Neuadd Ogwen attached behind.

An earlier C19 inn of some size, generally well detailed, with good lettering to facade. The scale of the inn probably represents Bethesda's importance on the Holyhead road, rather than the slate industry.