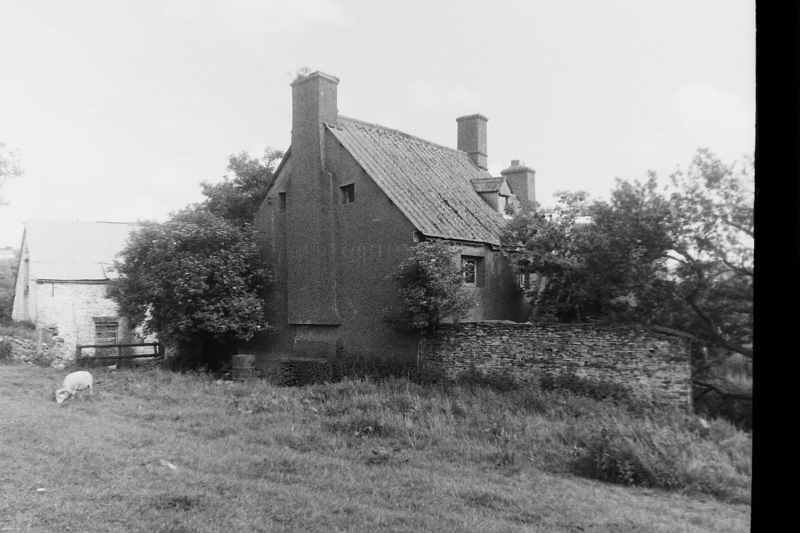 Location: Set back from the road approximately 1km N of Blackwood centre, with the principal farm buildings and yard on its E side.

The main range is probably c1600, with kitchen wing added to the rear in the C18 and extended at the downhill end probably in the C19.

A 2½-storey farmhouse of grey roughcast walls, steep corrugated metal roof and roughcast stacks. The main range is on a sloping site with an added rear kitchen wing set back from the uphill end, and a lower added extension at the downhill end. The main range has rendered stack to the R and gable hall stack to the L. The house faces W and its entrance is in a gabled porch offset to the R side with a segmental-headed doorway. To its L is a small-pane sash window inserted in the C19. In the upper storey is a 2-light wooden casement to the R and a wider casement to the L inserted in the C20. The attic has a single roof dormer R of centre. The lower extension has a R end stack, inserted casement to the upper storey and 2 lower-storey windows. In the uphill (N) gable end the external stack has been modified to incorporate a trough, while the gable has small attic windows L and R. The rear wing has a single ridge stack. Its rear gable end has a boarded opening to the R in the lower storey and inserted attic 3-light window. The rear of the downhill extension has a single-storey projection, to the L of which is an inserted window. The lower (S) gable end has a boarded door to the R and lean-to to its L.

Inaccessible at the time of inspection.

Listed as a sub-medieval farmhouse retaining its overall character and a rare pre-industrial survival in this part of the Monmouthshire valleys. In addition, it forms an impressive farm group with the adjacent multi-purpose agricultural range.