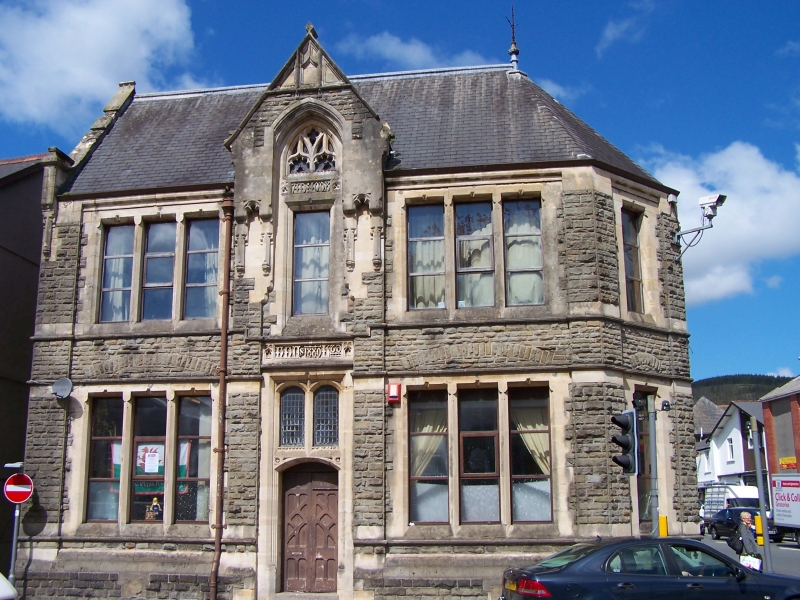 Location: Located on the N corner of Talbot Street with Castle Street, at the centre of Maesteg.

Built 1908 as the offices of the North's Navigation Collieries (1889), Ltd, which undertook the coal mining in the valley which had been started c.1800. It took over the assets of the iron companies in 1889, and eventually, by 1922, was the main controlling company of the area until the great depression from 1928 saw the gradual closures of the pits. Col. North 'the Nitrate King' of Fullerton and Eltham, died 1896.

Built of rubble with limestone dressings, with a slate roof. Flemish Gothic style. The main front to Talbot Street is of 3 bays, and the corner is splayed, returning along Castle Street as one triple and 3 single bays. Two storeys. Narrower central bay has an arched entrance with 2 tall paned overlights and frieze inscribed NNCs 1889 Ltd. Tall three-light windows on the side bays under a flush relieving arch, the original top sash and 2 fixed lights below surviving on the west side. The upper floor of the central bay is gabled and set forward on cusped corbelling, either side of a central window. This has a deep head inscribed AD 1908, and a 2-light cusped blind tracery window above, rising into the gable. Windows to the side bays repeating those below. The roof has a raised coped gable at the left end, and is hipped at the splayed corner, with a metal finial.

Included as an interesting example of Gothic revival applied to an office building for a leading industrial company of the area, and as a landmark in the industrial history of the district. Part of the group of listed buildings at the centre of Maesteg.