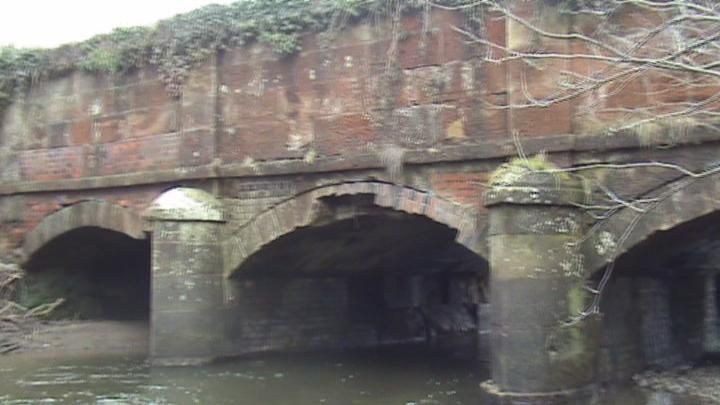 Location: Carries the Montgomeryshire Canal over the Bechan Brook on the boundary of Llandyssil and Newtown Communities.

The western branch of the Montgomeryshire Canal from Garthmyl to Newtown was built between 1815 and 1819-21 (Josiah Jessop, engineer, John Williams, builder). The original aqueduct at Aberbechan was repaired in 1859, collapsed and was rebuilt re-using much of the original facing stone, probably in the same year. There is also evidence of later C19 repair.

Three-arched masonry aqueduct. Planned on a concave curve over the Bechan Brook, and comprising 3 segmental arches. Finely dressed stone, with hoodmoulds and a string course over the arches. Main central arch flanked by keeled cutwaters, from which spring pilasters articulating the high stone-faced wall of the trough above the arches. This wall terminates in a plain cornice, with simple cast-iron railings on the tow-path side.

Included as a fine example of a small masonry aqueduct, and an important element in the engineering of the Montgomeryshire Canal.