A Grade I Listed Building in Menai Bridge, Isle of Anglesey 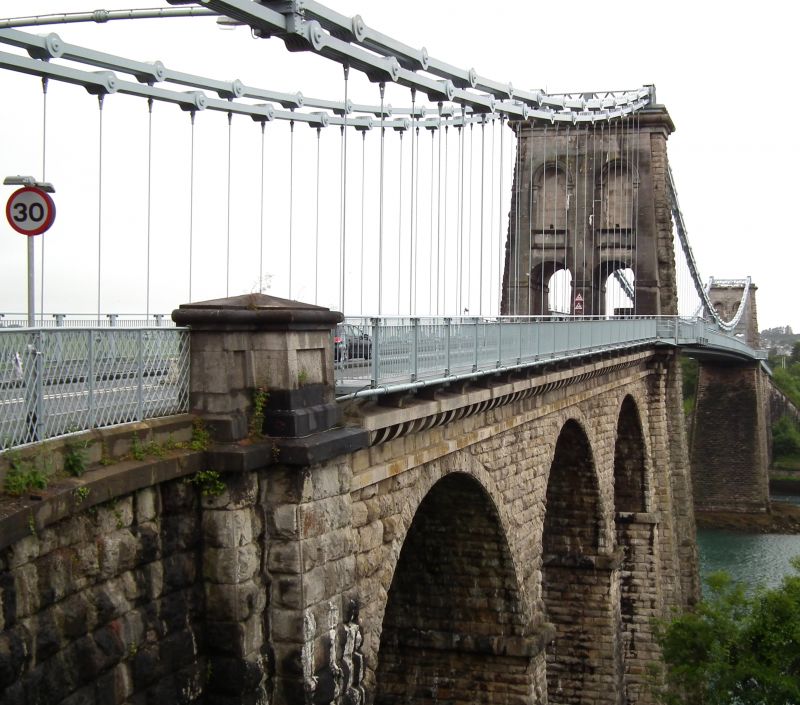 Built 1818 to 1826 by Thomas Telford. This renowned bridge completed the London to Holyhead Turnpike Road. The site was chosen because its steep banks enabled the erection of a high bridge to satisfy the Admiralty's requirements. The construction was a development of Telford's own design for an unexecuted bridge over the Mersey and that by Captain Brown for a bridge over the Tweed. Opened 30 January 1826 - 100ft high (30.5 metres), 28ft ( 8.5 metres) wide roadway and with a single suspended span of 579ft ( 176.5 metres); 130ft (39.6 metres) longer than any previously built bridge. Reconstructed 1938-40 by Sir Alexander Gibb, for Dorman Long and Company. The chains were moved from their original central position to their present location and the toll house on the Anglesey side was demolished, the suspending members being anchored to either side of the new roadway. Work was completed and the bridge freed from tolls on 31st December 1940

Coursed rubble Penmon masonry with ashlar facings to the tapered suspension towers or 'pyramids' from which the deck is hung on a system of 16 chains (originally iron, now steel) with pins. These are carried down at either end to a point deep into the rock. Four arches to Anglesey side and 3 to Bangor side, over tapered piers; voussoirs, impost bands and bracket cornice above. The later metal pedestrian walkways are further bracketed out; originally there was just the narrow central pavement. Each carriageway passes under the towers through semicircular arched openings, matched above by paired blind recesses over inscribed tablets. The handrails continue as far as the low tapered piers with pyramidal caps at each end and on the mainland side trellised railings continue to either side and sweep round to terminate in similar piers with panelled recesses.

Listed Grade I as an exceptional example of early C19 engineering work, remarkable for its structural virtuosity and the resulting aesthetic effect. An essential part of Telford's great scheme to link London and Holyhead.