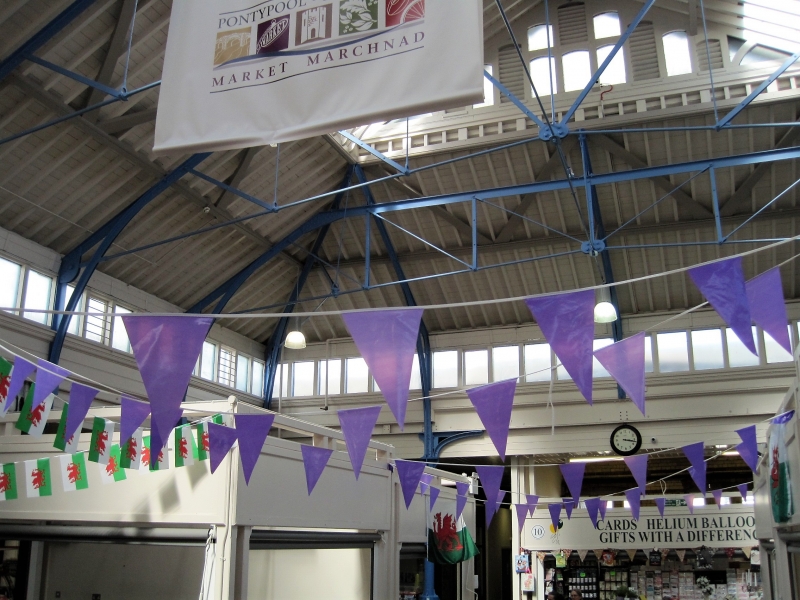 A market hall of 1893-4, built when the existing facility became too small and needed replacing due to the greatly increased local population. The previous Vegetable Market (1875) which stood on the same site was demolished, but the first hall built in 1730 still survives in Commercial Street. The Market was designed by Robert Williams and D J Loughor (who was probably the engineer). This building is the only physical reminder of the work of the Pontypool Local Board who were replaced by the Pontypool Urban District Council following the 1894 Local Government Act.

A large iron framed market hall with two full elevations and three secondary entrances through other street frontages, eg. Jubilee Building, Crane Street. Built of grey narrow coursed rock faced pennant limestone with some larger stones, and with yellow Ebbw Vale brick dressings and a Welsh slate roof. Single storey street elevations with windows onto secondary aisles which surround the main aisled hall. The Market Street elevation has a central doorway with four centred Tudor arch head. This has part glazed wooden doors with pilasters rising to a corbel frieze and a date panel 1893, and a parapet over with raised battlement type features at either end. This door is flanked on either side by four three-light windows with yellow brick frames and mullions. These are all in line, but the plinth below with yellow brick coping is stepped down the street. Additional doors flank these, again with pilasters but not rising to a parapet; then another three light window at the north end but only a single light one at the south corner. The end elevation has first a single light, then a two-light with king mullion, then five three-light windows, the most northerly one with a roundel in a gable above. The roofs behind these walls can be seen stepped up in three heights over the two aisles and the main nave. The nave roof has timber gable windows and glazing along the length of the roof on both slopes.
Crane Street entrance: This has another Tudor doorway as above, but flanked by one over one windows in plain heads. Above the entrance is a crow-stepped gable with block at apex and a three light window with stepped head above the door. Gable has date 1894 and inscription PLB (Pontypool Local Board).
Commercial Street entrance has another Tudor style doorway set into the ground floor of an early C19 terrace on the south west side of Commercial Street. Only the doorway and the dateplaque 1894 above it are late C19.

The market has a central nave supported on plain iron columns, and this has aisles on either side and then a secondary aisle which surrounds most of the structure. There are additional passageways giving access to the entrances in Commercial Street and in Crane Street. The columns carry light curved iron members, and a roof structure of light iron with timber rafters and sarking. The nave roof has bands of glazing running the full length on either side of the ridge. The interior appears to be very little altered. The stalls are mostly modern.

Listed as a surviving intact example of a Victorian market hall and an historical expression of the expansion and prosperity of late C19 Pontypool.