Manchester House, including Mayberry Pharmacy and the Good Job Club 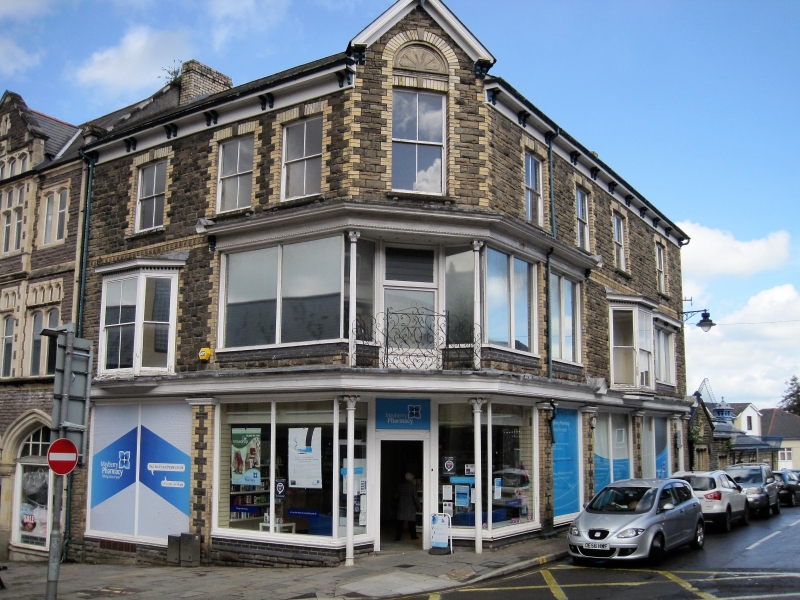 Location: In Pontypool town centre on the corner of Crane Street and Market Street

A late Victorian shop premises, probably for a draper, an ironmonger, or a house furnisher; which was probably built at the same time as the Jubilee Building next door which is dated 1897.

An elaborate late Victorian shop premises. Built of coursed squared rubble stone with yellow Ebbw Vale brick dressings and Welsh slate roofs. Large rectangular three storey block with three bays facing Crane Street, four bays facing Market Street and with the entrance on the canted corner. The ground floor is supported on stone and brick piers interspersed with cast iron columns with foliate caps. There are four double and two single display windows, plus the entrance which is recessed at the corner and framed by two cast iron columns. Continuous fascia. Replacement door. The first floor has from the left a canted oriel with two over two sash flanked by one over one. The corner is recessed as below with door onto small balcony and columns; double display window to left and paired ones to right with brick and stone pier between. Fascia ove this as below. To the right is a second oriel, then another double window. The second floor has three two over two sashes to the left, one to the canted corner in an arched recess, four more to the right. All these are framed by yellow bricks. Eaves on paired brackets, gable with bargeboards and spike finial to the canted corner, truncated ridge stacks.

Interior not inspected at the time of resurvey (October 1996).

A rare surviving example of an unaltered shopfront of this type with two storeys of display windows. Included for group value with Pontypool Market and neighbouring listed buildings.