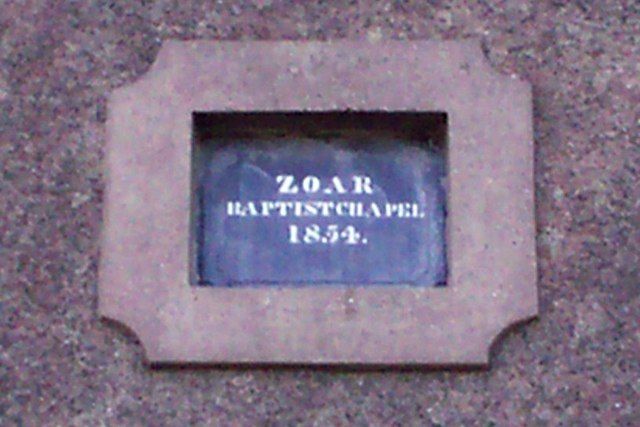 Location: At W side of an unclassified road 1 km SW of Llanteg. The chapel stands in a large graveyard with a hedge to the roadside. The S part of the grounds is separated by an earth mound and was probably ori

There is said to be a place for open-air immersion baptism in the adjacent woods: this is doubtless the oblong well marked on maps in the corner of a wood about 50 m S of the chapel.
A square building with gables facing to front (E) and rear. Rough-cast with smooth strips at the quoins. Slate roof with a tile ridge and timber bargeboards. The entrance porch stands against a featureless N wall. On the E front are two windows with Tudor-arched heads. Fixed lights of 12 panes plus six in the head interlace, the latter in coloured glass. Obscured glass in the bottom panes. On the rear side are two plain high-level windows with top opening lights. In the front gable is a very small name plaque.
The room or cottage to the S is under a continuation of the S roof slope. Two four-pane sash windows and a central door to the S. Chimney at left.

Double two-panel doors enter the chapel from the porch. The form of the interior is striking with steeply ramped pews. The pews are of a very upright design, with short seats and vertical backs, in seven rows. Simple framing and panels, with a tiny additional shelf beneath the seats; the woodwork painted with scumbled technique. The centre pew at the front has an open back with inch-square balusters. Pulpit between the E windows, with one flight of three steps and with a slight wall recess for the preacher to stand in. Pews each side. American Organ in the corner. From the chapel there is a door and four steps down to the annexe: this is a single long room with a fireplace at each end.

Listed as a simple country chapel; an austere design almost uninfluenced by the architectural ideas of more affluent congregations, and retaining its original layout.