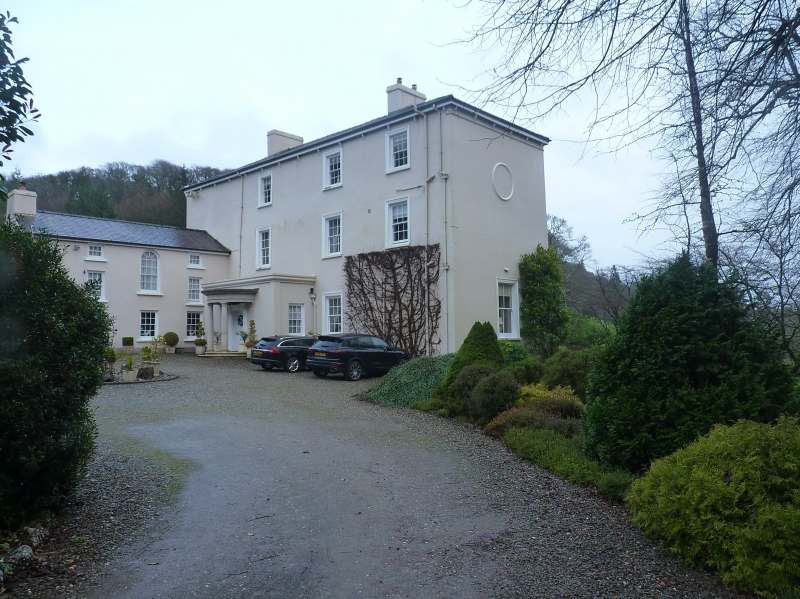 Location: At the S side of a minor road ½ km NW of Amroth Church. The house is at the head of a valley in an extensive area of landscaped gardens and woodland in National Trust care.

The house incorporates the C18 Rhydlangoed farmhouse as its NE wing. John Colby, a local mine owner, built Colby Lodge in 1803. The dining room decoration shows Nash influence but the date of Colby Lodge and the awkwardness of the planning makes a direct involvement by Nash improbable. Alterations are believed to have been carried out in 1825, the date having been observed on a roof truss.

John Colby died in 1823 and was succeeded by another John Colby. After some changes of ownership, in the mid 1870s the house and estate came into the ownership of the Kay family, and thence, in the early C20, to Col. and Mrs Crosland (née Kay) who were the main creators of the Woodland Gardens. Miss Mason, niece of Mrs Crosland, inherited in 1950 and in 1965 sold the house with gardens to Peter Chance. Improvements to the house were carried out in the late 1960s. The house, gardens and estate were later reunited in NT ownership and the house, with its immediate gardens and the walled garden, granted on long lease to the present owners.

The layout is unusual but suggests the N was the original front, as the old kitchen and the stairs landings are against the S side. Nonetheless the S has long been regarded as the front: the carriage sweep (as shown on the 1888 map) was brought round to the S and there was a porch at the S door position, now demolished. In the present century the N side (again?) became the front and acquired a porch and subsequently a rounded Tuscan portico in addition.

To the N side of the house is a large gravelled forecourt, and to the S and W a garden ending at a ha-ha. The valley landscape beyond the ha-ha was formerly the private grounds of the house. To the W of the valley are C18 pitmounds now incorporated in the NT woodland gardens. To the E is a walled garden.
Three-storied house ranging E/W with a lower three-storey wing at NE. Rendered and painted, with scored lines to imitate stone courses. Slate roof of low pitch with tile ridges and hips. Two chimneys, rendered. Brackets and a timber fascia at eaves. Sash windows of four panes in moulded architraves and with stone sills.
The present approach front is the N, with a range of 3 windows. Single storey porch with a recently added semicircular portico of two columns and two pilasters. The garden front to the S is a range of four windows, including, at the third position, a tall stair window of sash type with coloured glass in margin lights. The main door beneath appears badly centred beneath it because of the loss of the porch. The doorway has recently-added pilasters and entablature. On the E and W end-elevations is a roundel feature in lieu of an upper window.
The earlier house incorporated as a wing has three windows to the W elevation, including a tall round-headed stairs window centrally. White painted roughcast. Slate roof with a large chimney stack at the N end. Sashes with glazing bars. Later glazed doors. Its interior is completely altered. It has a cobbled yard to its E, with an old wash-house or laundry now used as a generator room.

The N side of the ground floor plan is occupied by a corridor. The stairs commence at this corridor. Four flights of easy pitch. Returned nosings over simple brackets, inch-square balusters, mahogany handrail swept at landings and coiled at the curtail step. A side corridor beneath the return flight leads to the S door. To the E is a former kitchen, to the W reception rooms now used as a drawing room and library. Stone-vaulted cellars beneath the E part of the house.

The drawing room has a decorative plaster cornice and at the E end an alcove flanked by curved doors and with two Corinthian columns and four Corinthian pilasters. The ceiling within the alcove has a groined centre panel flanked by fans. At the W end of the room a black marble fireplace with lotus capped pilasters and an overmantel mirror. The library has a black and white marble fireplace with early C19 decoration. A bedroom fireplace, not in situ, has the Colby arms and crest.

Listed as the fine house of a local coal-owner, preserving its character as a late Georgian gentleman's residence, with some good interior detail; enhanced by a fine setting in the care of the National Trust.