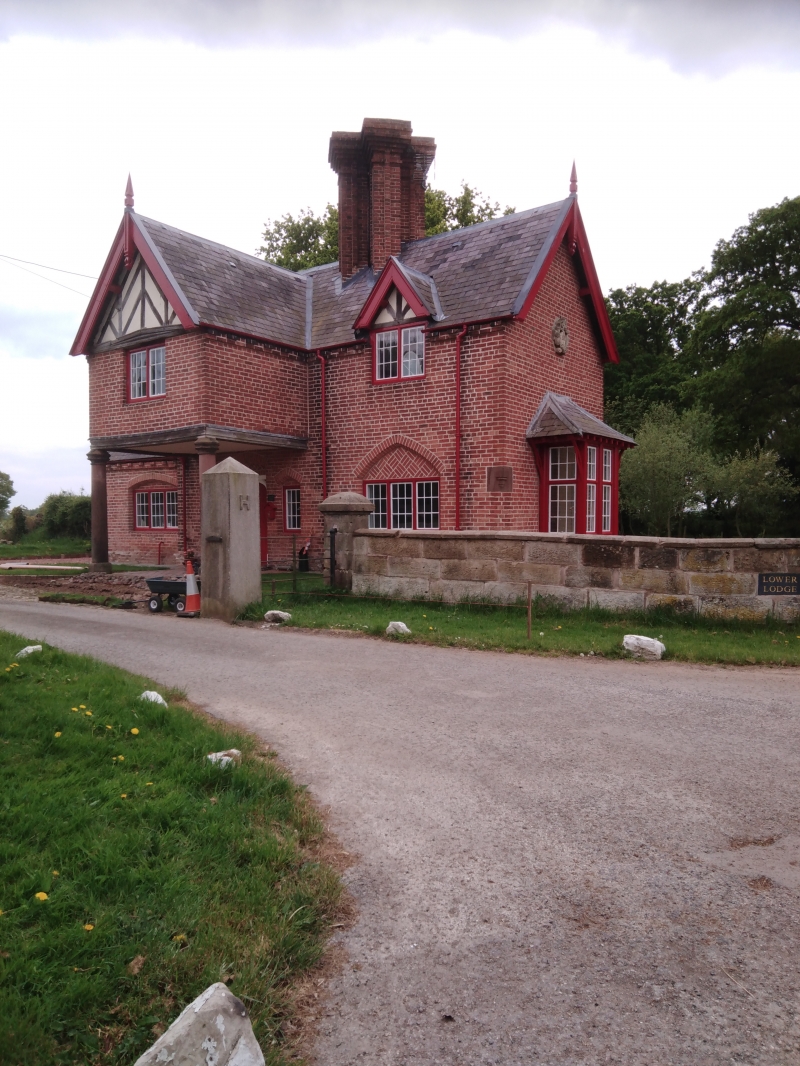 Location: Broughton Hall Lodge is located on the south side of the B 5069, to east of Worthenbury. Set behind stone wall.

Built in 1858 as one of three gate lodges to Broughton Hall (demolished 1961). The Hall had early origins and was re-built by Robert Howard who modernised the estate from 1852 onwards. Previously owned by John Whitehall Dod. The estate was subsequently sold in 1884 and the house was demolished in 1959.

Two-storey, red-brick gate lodge in Tudorbethan style under slate roof with dentilated eaves. Architect unknown. Elaborate diagonally set off-centre brick chimney stack of four clustered flues with moulded caps, as were a feature of Broughton Hall. Three window front with deeply projecting central bay forming two-storey porch in sub-medieval manner. The upper floor is carried on two Doric stone columns, the ground floor is open and the Tudor-arched door is flanked by small-paned lights. Small-paned wooden casement windows, mostly two-light. To the ground floor these are under pointed arches with bricks tumbled in to the apex. Small-paned wooden casement windows to the front elevation are both surmounted by timber-framed gables with barge boards. To the ground floor windows are three-light, to the first floor they are two-light. To the road a bay-window with casements and carved brackets. Above the gable end is a carved stone cartouche bearing the date "1858". The main, central, and end gables have barge-boards with carved wooden finials to their apex with open pendants. To the south a single storey projection with brick stack.

Listed as a very good example of a gate lodge in an accomplished Tudorbethan manner with picturesque massing and good detail, and for historic association with Broughton Hall.