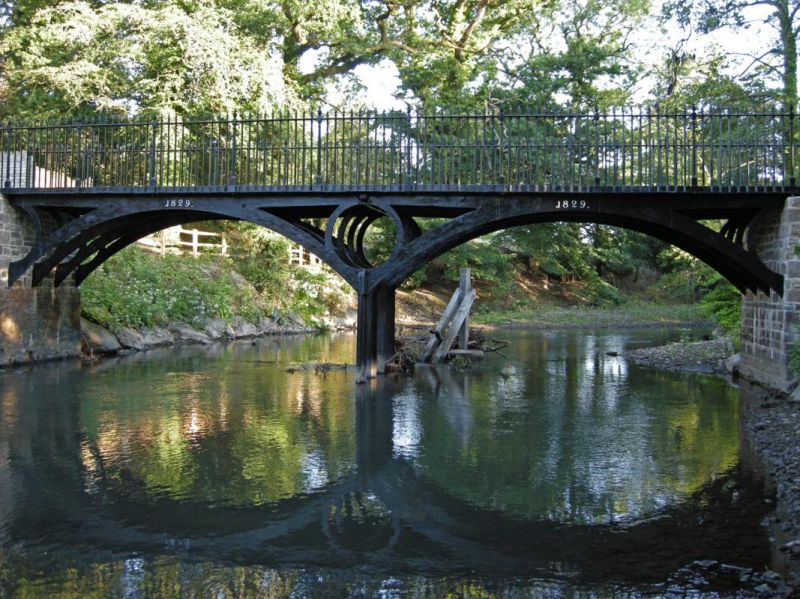 Location: Crossing the River Rhymney approximately 0.9km E of Draethen village and reached by private drive (and footpath) E of a minor road between Draethen and Michaelston-y-Fedw.

Erected in 1829 as part of a carriage drive between Ruperra Castle and Machen church. Its erection probably coincided with the appointment of Augustus Morgan, son of Sir Charles Morgan, to the living of Machen c1828. The drive is now a public footpath.

Single-carriageway 2-span cast iron bridge. Four central T-section piers carry segmental arches supporting the deck. The central spandrels have circles, while in the outer spandrels are half circles (similar to the Iron Bridge in Shropshire). One arch on the downstream side bears the date 1829 in relief. One arch on the upstream side is partly missing. The abutments are of coursed stone and are splayed outwards. The deck is laid with cast iron plates (now grass covered) and a has a parapet of cast iron railings with spear finials. Above the abutments the parapets continue as white-brick walls curving outwards and terminating in round piers (now mostly collapsed). In the L bank the abutment has an arched culvert, with arch ring on the downstream side and collapsed on the upstream side.

Included as a good example of an early cast iron bridge, of additional interest for its association with Ruperra Castle and the Tredegar Estate.