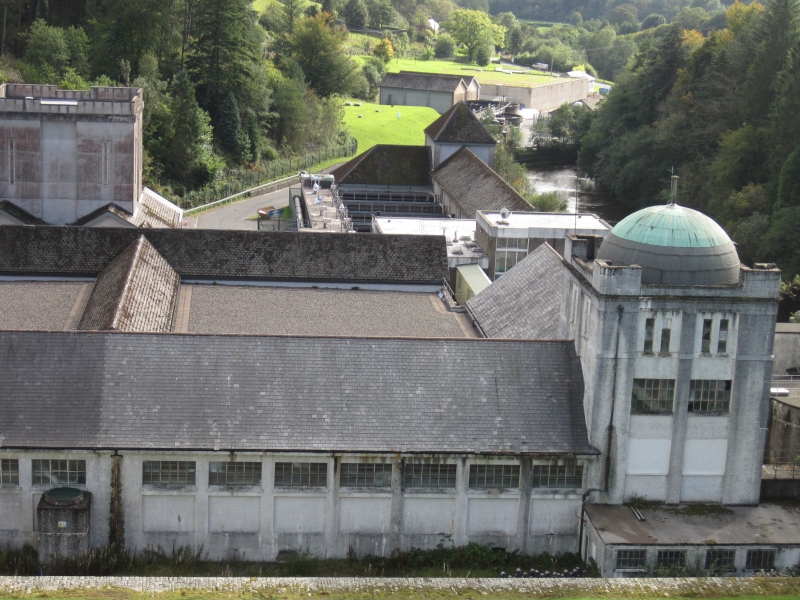 Location: Immediately below the dam to Ponsticill reservoir within the Water Treatment Works

Reservoir constructed in 1923, part of a massive water engineering project involving an extensive network of piping to the urban areas of S and SE Wales, which was termed 'The Two Million Scheme'. It involved a 2 shilling (10 pence) rate on local taxes and was carried out by the Taf Fechan Water Corporation, this latter body being contributed to by each local council. Resident engineer FV Stillingfleet, and engineers Sir Alex Binnie and Deacon and Thos F Harvey. Officially opened by Lord Buckland in 1927. 3400 million gallons (15456 million litres) of water a day were treated. Original range of 12 rapid gravity filter beds was in an L shaped building NE of the Compensation Basin. Provision was doubled in 1955 with a copy of the building creating a half-square. 1990s replacement in the gap between has left the beds unused since c 1993. All original fittings and machinery by Paterson Candy of London in place. Water was drawn in and filtered through the sand beds into an outlet box and thence into the pipework; a large tank S of the house stored water, replaced 1950s.

The original L- shaped range consists of 2 wings joined by a corner tower. Built of brick rendered in roughcast with a Welsh slate roof, copper dome to the tower. The main wings have 10 pane metal-framed windows under the dentilled eaves and a large semicircular window with decorative voussoir-type mouldings in the gable ends (now appears internally in extended range). The tower which holds a staircase is 4 storeys with similar larger metal-framed windows, smaller upper storey windows with some billet moulding, and is topped by a green copper dome. The extended range to E is slightly smaller with a smaller tower lacking the dome.

Roof is supported by a network of bolted steel trusses and lined with painted timber. Beds are of concrete, each with valve; railed walkway has terrazzo floor. At lower level is the filter machinery for each bed, the box tanks lined with white and brown tiles. Former outer wall with large round headed steel-framed multi-pane windows now an internal wall to new development. By the staircase is a tiled water sampling point.

Listed for its special interest as a filter house almost unaltered since construction c1923 retaining all its original machinery.

Group value with the Turbine House and Compensation Basin.