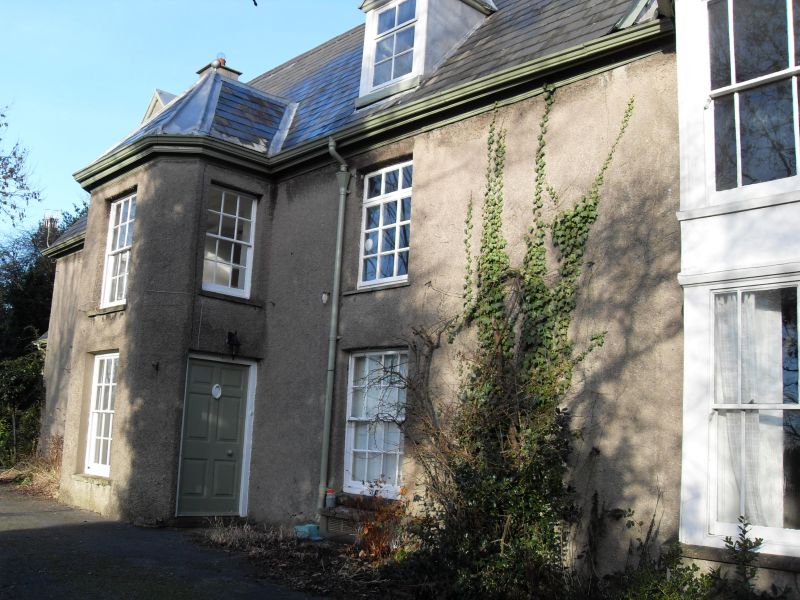 Location: Approximately 200m NW of St Catharine's church and set back from the road.

Originally known as Greenfield, a farm of that name is first recorded in 1795 and the present main range probably dates from that time. In 1829 it was occupied by the ironmaster John Reynolds of the Oakwood Ironworks near Pontrhydyfen. Later occupants included an agent of the English Copper Company at Cwmavon, David Smith, the founder of the Vernon Tinplate Works, and Richard Phillips, manager of the Melyn Tinplate Works. Originally consisting of a main range, the extant additions to the house are all shown on the 1881 Ordnance Survey. The house became a vicarage in the 1890s when, after the completion of St Catharine's church, Baglan became a parish separate from Aberavon.

The main house is Georgian, of 2 storeys and attic and of 3 bays, with roughcast walls and slate roof with roughcast end stacks. The central bay projects forward under a hipped roof and has chamfered angles. A fielded-panel door is on the R return wall of the central bay. Otherwise the front has hornless sash windows, except upper R where the 12-pane window is replaced. Gabled roof dormers have 2-light small-pane windows. A lower 2-storey 1-bay wing on the R side is late C19 and has canted bay windows with sashes and a roughcast end stack. A 1-storey wing set back on the L side has a doorway with margin lights framing a half-lit door and beneath a blind round-headed arch.

Behind the main range is a lower 2-storey projection with an added 1-storey gabled projection on its L side. An outshut is against the single-storey wing.

The lower storey of the central bay to the front is a porch. It has a half-lit panelled front door to a central stair hall. The stair, placed towards the rear, has winders at the bottom, turned balusters with wreathed handrail, while beneath it are stone steps to a cellar.

Listed primarily for its architectural interest as a small Georgian house retaining original character and detail.