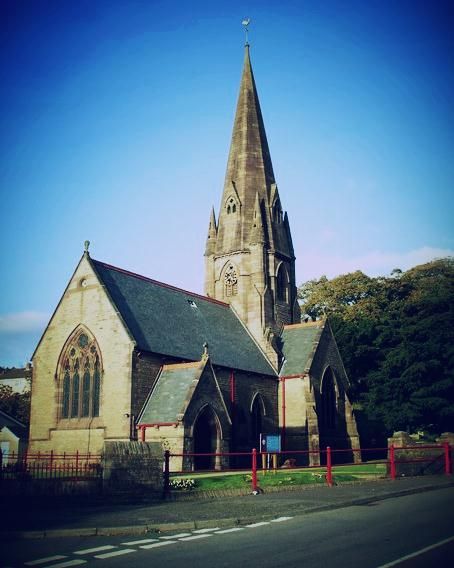 Location: Prominently sited at the junction between St Illtyd's Drive and Church Road. The church is set within a walled churchyard with Baglan brook on the SE side.

Built 1875-82 by John Prichard, diocesan architect. It is Prichard's most ambitious complete church. The construction was superintended by local architect John Jones, and is said to have cost in excess of £17,000. It is also said that building work was scheduled over a seven-year period and that no stone was dressed on site, thereby piously imitating the building of Solomon's Temple in Jerusalem. The patron was Griffith Llewellyn of Baglan Hall, whose mother Catharine is commemorated in the dedication of the church, which is said to explain the variant spelling of the saint's name.

A compact cruciform early Decorated style church with tall crossing tower and spire, built of coursed rock-faced stone with red Forest of Dean stone dressings, and steep slate roofs behind coped gables. The lower parts of the walls have a distinct batter and a sill band is carried around the entire building. The windows have intersecting tracery with thin quatrefoils and trefoils in the tracery lights, and hood moulds with head stops. The chancel has a 3-light E window and a S window consisting of a spheric triangle. In the angle with the chancel and S transept is a polygonal stair turret with a boarded door in a pointed doorway with triangular hood and with 2 narrow stair lights above. The turret has a pyramidal stone roof below the bell stage.

The shallow S transept has diagonal buttresses with gablets to the offsets and a 3-light S window. The 3-bay nave has two 2-light windows and a gabled porch in the bay at the W end. This has a 2-centred moulded arch of round cross section with fillet, and is continuous with the jambs. Above is a recessed quatrefoil panel with a cross in relief.

The nave has a 4-light W window and a quatrefoil below the apex. A shallow 2-bay N aisle is set back from the W end and has 2-light windows either side of a buttress. The N transept is longer than the S, having been extended in 1899, and has a 3-light N window. On the N side of the chancel is an L-shaped vestry built as a lean-to against the transept and chancel. A doorway facing E has a shouldered lintel, while at the E end is a lancet above steep stone steps to a crypt with boarded door. Further E against the chancel N wall, but set back from the E end, is a flue disguised as a stepped buttress with a single pot composed of clustered shafts, similar to the pinnacles on the tower.

The well proportioned tower and spire provide a strong visual focus to the exterior. The upper stage of the tower and the spire are of ashlar. The upper stage turns octagonal with 2-light belfry windows in the cardinal directions. Above the sills in each face the main lights have 2 tiers of open quatrefoils carved with central 4-leafed flowers. At the angles are large pinnacles that begin square and then rise above gablets as clustered filleted shafts, the recesses of which sprout foliage beneath a moulded cornice and conical caps. The caps have shallow vertical ribs in relief and are inset with trefoils and narrow vertical panels. The cornice below the spire incorporates a frieze of ballflower. The steep spire has, in the cardinal directions above the belfry windows, 2-light lucarnes.

Double iron gates in the porch open to a mosaic floor and the nave S doorway, which is chamfered and pointed without capitals. The head stops are portraits of Griffith Llewellyn of Baglan Hall, the patron of the church, and Bishop Ollivant of Llandaff who consecrated it. The porch has a pointed arched-brace roof with castellated wall plate and shields at the foot of the principals.

The interior has walls, piers and arches banded with grey-green Quarella stone, red Forest of Dean stone and pink alabaster. The windows have finely moulded rere arches. The nave, without clerestorey, has a 3-bay N arcade with round piers, moulded capitals and 2-centred arches, which have a continuous hood mould with foliage and head stops. The nave has a 4-bay arched-brace roof, which has open arcading above the wall plate, and is boarded with windbraces behind the principals. Flanking the crossing 2 corbelled heads look out over the nave and represent life and death. The nave has a mosaic floor and is stepped up to a richer mosaic floor beneath the crossing. The rib-vaulted crossing has moulded 2-centre arches with 2 orders of chamfer, stiff-leaf capitals to the imposts that stand on short shafts above corbels of the 4 Evangelists to the nave and chancel, with king, queen, knight and bishop to the transepts.

The chancel is the most sumptuously decorated part of the interior in line with high Victorian taste and has marble-banded walls. The arched-brace roof is boarded over the altar as if intended for a painted ceilure. The wall plate has angels bearing Passion symbols at the foot of the principals. The floor is stepped and is laid with Devonshire marble and rich Italian mosaic. A castellated band is continuous at sill level. The E window is flanked by panels set with Italian decorative ties. The cusped rere arch has an outer order consisting of a rich vine trail, and has shafts with shaft rings and stiff-leaf capitals. A reredos spans the full width of the chancel. It comprises an Early-English style arcaded frieze which has detached shafts with shaft rings, and cusped arches with crocketed gables and finials. The shafts are alternately alabaster and polished Quarella stone. In the centre is a Resurrection inlaid in black and white marble by H.H. Armstead. The piscina and sedilia have similar details to the reredos. In the chancel N wall is a Llewellyn memorial in a cusped arched recess, the back of which is decorated with small square relief panels in stone with foliage patterns. A brass inscription panel set against this back surface commemorates Griffith Llewellyn (1802-88) and his wife Madelina (1826-1903). A pink alabaster slab in place of effigies has a relief inscription to the front and mosaic inlay to the upper surface.

The font and pulpit were carved by Wormleighton of Cardiff to Prichard's designs and are of white alabaster and marble panels. The richly decorated octagonal font is mounted on a mosaic plinth. The stem has filleted shafts and stiff-leaf capitals, and marble panels with cusped stone arches and trefoils in relief. Around the bowl are marble panels which have stone quatrefoils in relief framing sculpted crosses and heads. The similarly ornate pulpit is octagonal and has marble panels with Gothic stone arches in relief, and an alabaster carving of Christ with his disciples to the front. Above is a foliage cornice. The pulpit stands on a stem with cusped arches below nodding crocketed gablets enriched with finials and foliage friezes. The pulpit steps have brass balusters similar to the altar rails. There are 2 rows of choir stalls on either side beneath the crossing, also by Wormleighton to Prichard's design, and carved from Baglan oak. The back row has moulded arm rests and an arcaded canopy behind with relief foliage in the spandrels and a frieze above. The front rows have richly moulded ends including figures of St Catherine added by W.R. Llewellyn after he inherited his father's estate in 1888. The open stall fronts are of brass with moulded wooden kneelers and book rests. The altar rails are also of brass and consist of thin scrolled rails intersected by horizontal bands. Heating grilles in the floor are also of brass. The nave pews have moulded pew ends and are also of Baglan oak.

The E window has a fine Crucifixion scene with surrounding foliage designed by Edward Burne-Jones for Morris & Co. The S transept window shows St Cecilia, also designed by Burne-Jones although 2 of the angels in roundels below are by William Morris.

In the N aisle is a wall tablet commemorating the 1914-18 war. An early Christian stone with relief carving is set into the N wall of the vestry in the N transept.

Listed grade I, St Catharine is of exceptional architectural interest as the most complete church by John Prichard, the leading church architect in C19 S Wales, having a striking and well-designed exterior as well as an opulent interior.