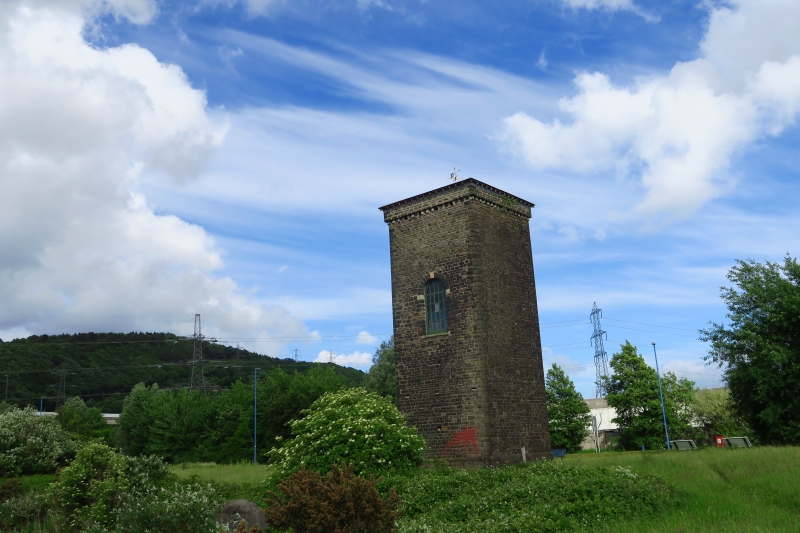 The Briton Ferry Dock Act was passed in 1851 and the dock was opened in 1861. Its engineer was Isambard Kingdom Brunel who died in 1859 before the project was completed. It comprised an inner floating dock and an outer tidal basin, between which was a hydraulically powered lock gate. The hydraulic power was generated from the adjacent engine house, of which the tower survives. The dock closed in 1959, subsequent to which the inner floating dock has silted up, with the high-level A48 and M4 built partly over it, and its entrance infilled.

The building survives as a roofless shell, of which the exterior walls are substantially covered with vegetation. It is a tall 3-stage tower square in plan, of snecked rock-faced stone with a projecting plinth and an eaves cornice projecting on a corbel table. On the W side facing the docks is a round-headed window in the middle stage with part of its iron-frame glazing remaining in situ. On the opposite E side is similar middle-stage window with key and impost blocks, and a round-headed doorway in the lower storey with similar details. The N and S sides both have narrow openings at plinth level, blocked on the S side.

Inside there are a pair of closely spaced timber beams immediately below the top of the wall, while below it in the N and S walls are the infilled sockets of 3 other similar pairs of beams. Although the structure is roofless a triangular boarded panel of a former shallow hipped roof lies across the top of the structure.

Listed for the industrial archaeological interest of its association with Brunel's innovative lock gate with bouyancy chambers, and for group value with the dock walls.