The Anchor P H including the Watergate 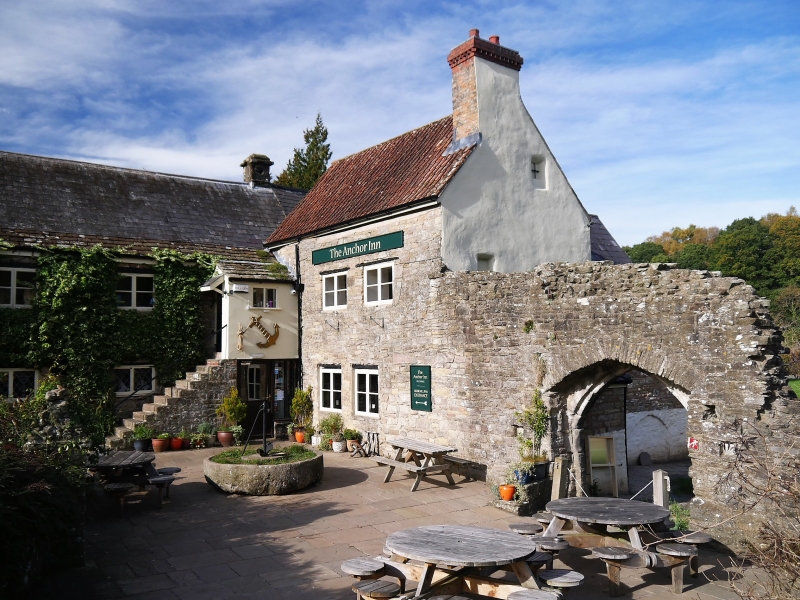 Entry Name: The Anchor P H including the Watergate

Location: About 200m west of the entrance to Tintern Abbey.

The building is in two distinct sections forming an L-shape and with the longer wing to the left. The shorter range is also L-shaped with a wing projecting to the rear. The longer range seems to have had an industrial origin and to have been a cider-mill with granary over, while the shorter and older range was the house of the miller and ferryman of the Abbey ferry. The ferryman's house appears medieval in origin as early masonry can be discerned outside, and it seems likely from its shape that the existing structure, which otherwise reflects a probably early C18 refurbishment, is wholly medieval, although the rear wing is partly later. The cider-house wing seems to be C17, and then considerably reconstructed in the mid C19, and the whole building has been refurbished as a hotel in the mid C20. The Anchor has been in existence as a licensed premises since 1806 and is thus a product of 'picturesque' tourism, but its position by the Abbey watergate may reflect an involvement with hospitality going back to the Middle Ages. The ferry operated from the C14 until c1920 when rail traffic ceased on the bridge and it became available for foot traffic.

The building is constructed of rubble stone, partly rendered over, with Welsh slate and pantiled roofs. Two storeys and attic to the older section with two windows to each floor, modern 2-light timber casements with leaded lights. Steeply pitched pantile roof with large gable stack to the right. The gable wall has small rectangular blocked windows on the first floor and in the attic, while a small lean-to with a slate roof covers the ground floor. This is beside the remains of the pointed arch of the Abbey watergate which is attached to the building. The rear elevation of this block has the remains of the first floor window which is mostly obscured by a catslide roof of slates over the projecting rear wing. This wing is built on the remains of a vaulted undercroft of which fragments are still visible externally, but it must have been heightened at least in the C18 to cover the C17 window. The rear gable has a blocked window and a 2-light casement on the ground floor and a single light one in the gable above.
The cider-mill range is also in two builds with the main part at the front of the hotel. This has four bays, two doors and two windows below and three windows and a door at the top of an external staircase above. The windows are modern 2-light casements. There is a ridge chimney at either end of the slate roof. The gable wall has two cross framed casements above a bar window, bargeboarded gable. The rear wall is blind. The extension of this range at the rear, originally a separate building with an open passage between, is of a c1900 date and has a gable to the river with a gambrel roof. The rear elevation of this has later windows.

Only the ground floor was seen at resurvey. The older section has been converted to a dining space and has features not easy to decipher with nothing overtly medieval visible. The bar is the old cider-house with the mill apparently in-situ in the corner but the press has been removed. The very heavy beamed structure of the ceiling demonstrates that the upper floor was probably a granary as is also suggested by the external stair.

Included for its historic interest as a part of the Abbey group, as a probable medieval building, as a converted cider-mill, as the home of the Abbey ferryman and as a part of the history of 'picturesque' tourism in the Wye valley. The survival of cider making machinery in-situ is now extremely rare despite its former frequency in this area. Another mill survives in Tintern Community in The Old Cider Mill (qv).
The Watergate is Scheduled Ancient Monument Mm 265 (MON).