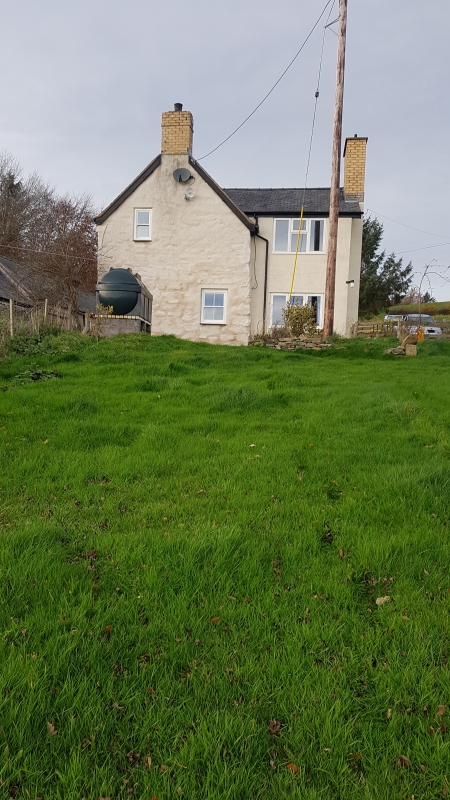 The original house is at the right, and carries a datestone marked I / I A / 1751, though internal evidence of timber framing may suggest an earlier date. A two-bay adjacent part is probably also C18, and a cartshed and stable to the left are later additions. The house was remodelled in the later C19, and the fenestration, chimneys, and porch belong to this period. The house has been recently extended to rear.

A small two-storey, three-window symmetrically fronted farmhouse facing its farm buildings across the lane, with an extension to left under the same roof line irregularly fenestrated. Horned sashes to the main house part. Brick porch. Inside what appears to be the original C18 main door is of particular interest, boarded and counterboarded in oak with a regular pattern of clenched nails overall, the carpenter's scorelines for setting them out being visible. This door has a moulded frame and has wrought iron hinges with fleur de lys terminations. The extension has two small upper windows and two doors and a window below. Rendered, whitened, with a slate roof and one mid- and two end-chimneys in yellow brickwork.

The shed and granary added to the left is also rendered, with a slate roof. Two square openings above to the granary, with lattice infill. The granary door is in the gable end above a flight of stone steps. Below, at front, is a cart entrance with an elliptical arch in stone and a stable door and window with segmental arches.

Symmetrical plan with central entrance lobby and stairs. The stairs have splat balusters. Plain plank door beneath the stairs with hinges similar to the front door. The main room at left has a chamfered cross beam, and the rear wall is timber framed but this is partially concealed. The extended domestic part to the left is reached by a short flight of stone steps, and contains the features of a former large kitchen though the cast iron kitchen range has been removed.