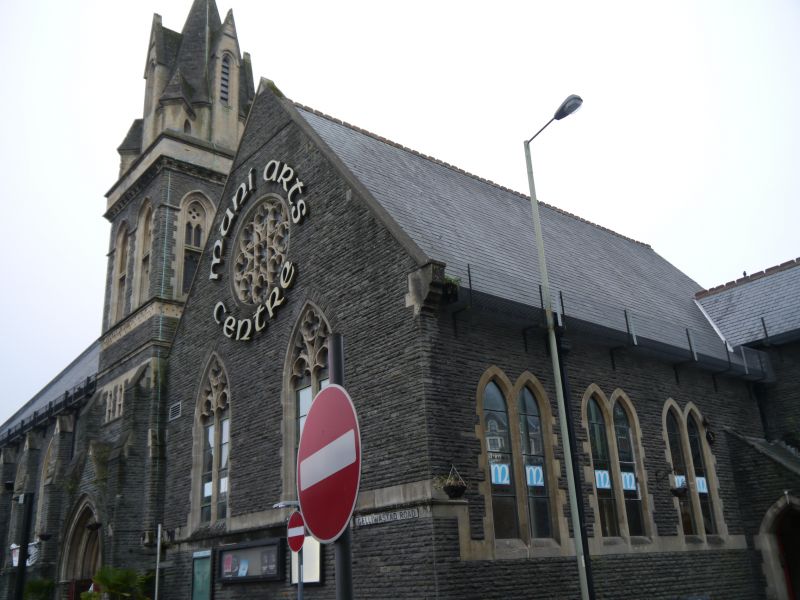 Location: At the N end of Gelliwastad Road and on the S side of its junction with Chapel Street.

Originally a Wesleyan chapel and built in 1895 by Arthur O Evans, architect of Pontypridd, adopting the then fashionable scheme of combining chapel and Sunday school in a unified composition. It later became a Municipal Hall and was converted in the 1980s to an arts centre with theatre, gallery and café.

A geometrical style former chapel built parallel to the road, at the N of which is a lower former Sunday school with its gable facing the road. Of coursed rock-faced sandstone, lighter freestone dressings and slate roof. The 3-stage tower with spire is the focus of the exterior and projects at the R end of the chapel's street frontage. It has angle buttresses to the lower 2 stages. The main doorway is under a projecting gablet, has 2 orders of shafts with annulets, foliage capitals, a moulded arch and replaced double doors and overlight. The middle stage has 3 narrow cusped lights and plain impost band, above which is a moulded string course. The upper stage has 2 tall and narrow transomed windows. These are 2 lights with subsidiary mullions above the transoms and geometrical tracery. A plain parapet projects on a moulded corbel table. The octagonal ribbed spire rises from a short base, which has diagonal buttresses pierced by arches. In the cardinal directions the spire has lucarnes of exaggerated size, each incorporating a single lancet with louvres.

The main chapel, now the theatre and cinema, on the L side of the tower, is of 6 buttressed bays, the buttresses rising to gablets at eaves level. Each bay has a 2-light window, with alternating tracery designs, and sill band. The bay set back from the L end has double boarded doors below the window. The L gable end has an integral lower gabled projection, now housing the stage, with stepped angle buttresses and an infilled large pointed window. On its R side is an added projection facing the street, with plain openings and roof concealed behind a parapet. On the L side of gabled stage projection is an outshut.

On the R side of the tower is the gabled former Sunday school, now gallery and café. This has two 2-light windows with Y-tracery and a sill band, and circular gable window incorporating quatrefoils in the tracery. The R side wall has 3 pairs of lancets with plain sill band, then a lean-to porch with chamfered 2-centred doorway and boarded door. Further R is a 2-storey gabled projection, the eaves higher than the Sunday School but the apex of the roof lower. It has narrow windows under lintels in each storey.

The rear, facing a car park at a higher ground level, has an added projection to the main chapel, the gable end of which behind the tower has 3 infilled stepped lancets, while the Sunday school has escape doors.

The original chapel is now a theatre and cinema. The Sunday school has an inserted upper storey housing the gallery, in which is a 4-bay arched-brace roof, boarded above the level of the collar beams.

Listed for the architectural interest of its Gothic exterior, and for its contribution to the impressive range of buildings on Gelliwastad Road, including the Municipal Buildings and St Catherine's Church.