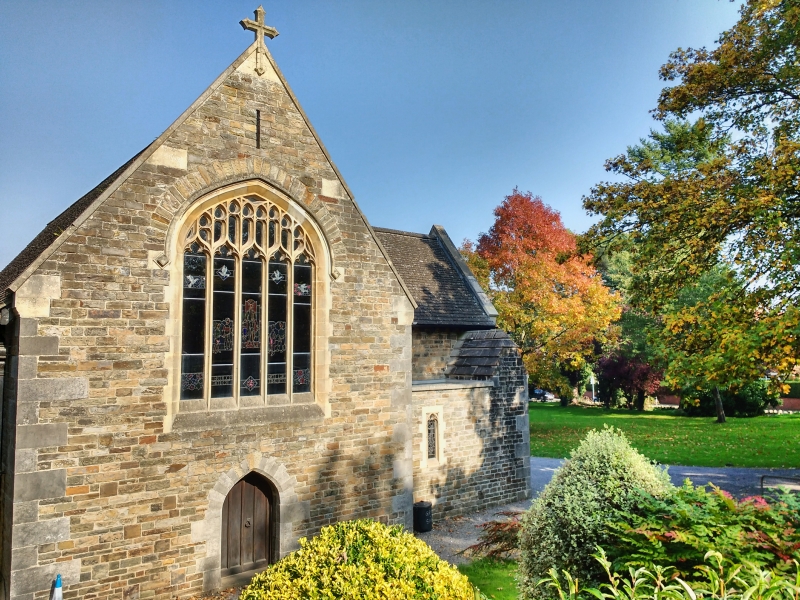 Location: On low-lying ground by the Cadoxton River a short distance N of the village centre.

Designed by J Coates Carter, the notable Glamorgan architect, and built after his death in 1929-30, omitting the originally planned tower and N aisle. Much of the masonry was re-used from the Cyfarthfa ironworks. Built to serve the growing community of Dinas Powys whose earlier parish church is in the separate hamlet of St Andrew's Major, its immediate predecessor being an 'iron church' in Highwalls Road.

Interior is of unrendered dressed stone blocks. 4-bay S aisle has plain wide pointed arches with square piers and simple chamfered caps. Chancel arch is also wide and pointed with no caps. Open timber roof of Columbian pine with 4 trusses of tie-beam, collar and queen posts to nave; 2 similar lower to chancel; deep crenellated wallplate. Furnishings throughout of light oak. Screen to side chapel at SE. At W a baptistry arched recess with low font on a thick round stem and deep plinth, given by Sunday School scholars in 1936. 3 steps up to chancel, low chancel screen with returns incorporating clergy seat, 3 rows of choir stalls, 1 step up to sanctuary and 3 to altar; organ in recess N and adjacent grid door to vestry.

Listed for its robust architectural interest and by a prominent Glamorgan architect.