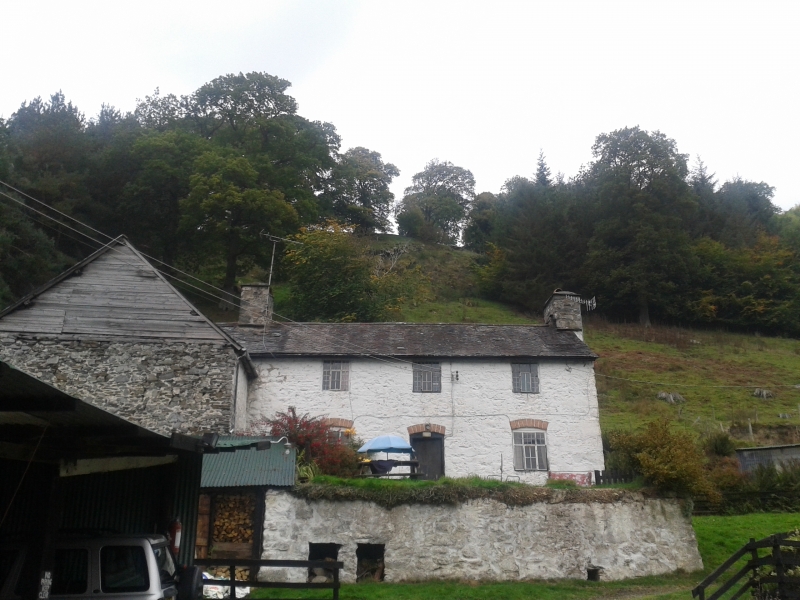 A cruck-built hall and byre of the C15/16 sited north/south and markedly downhill, with an early C19 side wing. The earlier part was probably originally timber framed, but has been rebuilt in stone.

The earlier part is on two levels, hall above and byre below, but it is unclear whether there was originally an internal communication between them, or a cross-passage at or near the chimney position. A chimney serving the hall was inserted at the change of level, perhaps in the early C17. The doorway communicating with the later (early C19) house is probably not an original opening.

The earlier (downslope) range is of 1½ storeys, but only the domestic upper part of this range is lofted. Quasi-rubble slate walling apart from the gables to north and south, which are timber-framed. Small random slates in graded courses on the east side, corrugated sheeting on the west side, tile ridge, mid-chimney truncated to just above ridge, the stack lost. The east side was the original front facing the farmyard and is painted white.

The upper domestic part of the earlier range faces east. The doorway to the hall (not opposite the chimney) has a timber lintel and boarded door. Two dormer windows and two lower windows, not quite aligned, all of two lights. The dormers have catslide roofs, one slated, the other sheeted. One opening to rear (west) has a steel window. The lower part of this range faces west: three doorways with timber lintels; boarded doors, that to the right (south) is a heck door.

The C19 wing on the east side is a two-storey and three-window structure of considerable character in its own right, in similar materials. The stonework of this part is painted white apart from the chimneys. One end-chimney and one chimney abutting the earlier house. This later wing is fenestrated to the front only. Three-light mullion and transom windows above against eaves; similar but larger windows below with segmental arches. No sills. Boarded front door with similar arch.

The earlier range of the house has a central (probably inserted) chimney with hall to the north and beyond the hall two small inner rooms. To the south of the chimney and at a considerably lower floor level there is a byre, the end bay of which was probably a stable. There are four bays with three cruck frames: the first separates the inner rooms from the hall, and incorporates a tongue and groove planked dais partition with two pointed-headed doors (the angle of the cruck forming part of the doorhead shape); the door to the left, possibly to the parlour, survives. The second cruck frame is at the chimney position and the third is within the byre.

The entrance to the earlier range from the C19 range is by a doorway opposite the chimney and a short flight of stairs up.

The later wing is planned symmetrically with a central bay containing the stairs.

Listed at grade II* as a survival of an exceptional sub-mediaeval house related to the longhouse tradition with cruck framing and other original constructional features, coupled with a C19 late vernacular wing which has retained its character well.