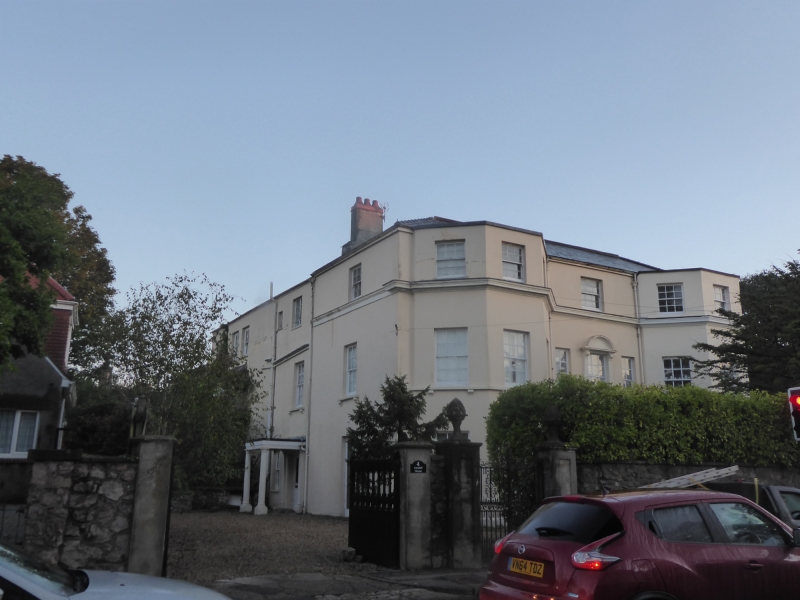 Location: At the junction with Cardiff Road and the key building at the western entrance to Llandaff village.

Mid C18 (shown on map of 1776), domestic Palladian in character and likely to be very close in date to 1750, all the surviving original features suggest this, one suggestion is betwen 1753-8. The previous house had been owned by Thomas Roberts who died in 1741 and his widow married Thomas Edwards, Steward to Cardiff Castle, who lived there until 1794. He rebuilt the house, then known as Llandaff House, as above. It was later (1847-60) the Deanery, occupied 1847-57 by Dean Conybeare the rebuilder of the Cathedral, and it was further enlarged and modernised in c1880, probably by John Prichard for William Luard, Treasurer of the County of Glamorgan. The house was divided in two in the early C20, by the Gunn family, and the entrance hall became the kitchen of No 4 and the entrance to No 4 was put in the left hand return and that to No 2 in the right hand return. The late C20 has seen the old entrance hall restored to its original form. The house is, by reputation, older than the mid C18, but there is nothing now visible to suggest earlier origins and the cellars do not appear to be pre-C18, so Thomas Edwards seems to have done a complete rebuild. The previous house is, however, recorded as being in exactly the same very distinctive position on the Cardiff/Fairwater Road junction on John Speed's plan of 1610.

The left return (No 4) has four bays of 6 over 6 sashes with an inserted doorway with modern pillared porch on the ground floor. The attic windows to No 4 have 3 over 1 panes. The ground rises and the rear room, a large ballroom, is at a higher level. This has a large tripartite stucco framed window and paired sashes above. Beyond this is a c1880 extension which is limestone rubble with red brick dressings. This has two sashes with elliptical heads on the ground floor and a paired one sitting on a cill band above, these are to the billiard room. Eaves on brackets. This room has a large lantern with pyramid roof.

No features older than mid C18 were in evidence. The cellars have two barrel vaults in rubble. The original entrance hall is in the process of being converted back to its first use. The Drawing Room has mid C18 panelling, doors and fireplace surround. The panels above the dado are covered in Victorian embossed gilded paper. The west window has been converted to a door and back again to a plain glazed window. Entrance door with two fine Victorian stained glass panels. Open well staircase with wrought iron balustrade and mahogany rail. Cantileved stone stairs with shaped soffits; this leads to a half-landing with the entrance to the rear wing. This has the Ballroom, which has mahogany doors with Palladian surrounds and an altered fireplace. Behind this is the Victorian wing with a closet in the Burges Gothic manner and a Billiard Room with an elaborate inglenook with fireplace dated 1888, stained glass, coved ceiling and a large lantern light. The main stair rises to a landing with three doorways, one now blocked (No 2). Plain bedrooms. Bathroom with Victorian fittings. Attic floor not seen.

Included as part of an important mid C18 house with some fine interiors.