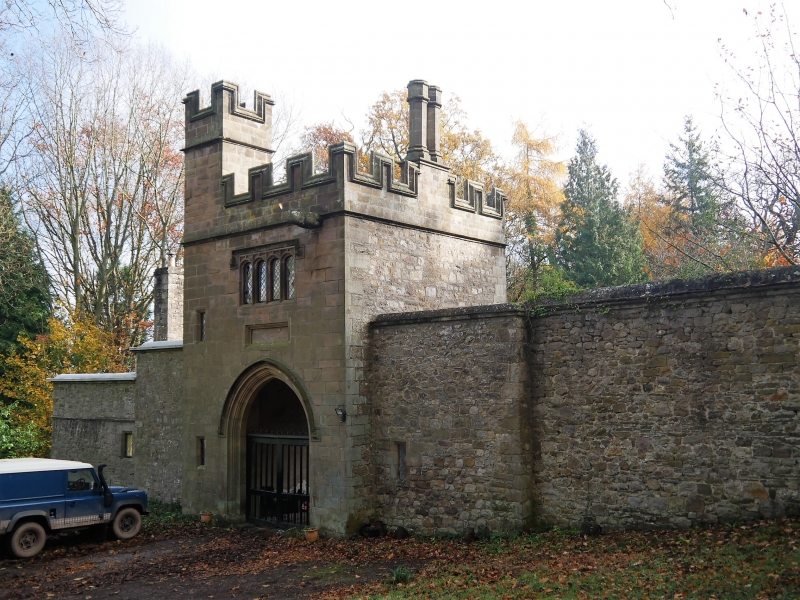 Location: On the east side of the A4052 at the north-western extremity of Llanover Park.

This building is a part of the Llanover Park of Benjamin Hall designed by Thomas Hopper and built 1828-37. The lodge is likely to be from the final years of the campaign and thus c1835. The house was demolished in 1935 and the stables became redundant. This is the last surviving part of the Hopper work in good condition.

Built of red sandstone ashlar for the gate-tower and coursed, squared rubble for the lodge and attached walling. Entrance lodge and gateway in the manner of the courtyard entry of an Elizabethan country house. The gate-tower is two storeys with a slightly off-centre 2-centred archway which has a dripmould with square stops, double oak gates. Slightly wider walling to the left of the arch to house the stair, which has two slit windows. Above the arch is a rectangular sunk panel and above that a 4-light stone mullioned window, the lights with 4-centred heads, dripmould over. Stringcourse, castellated parapet, turret for the stairhead, chimneys to either side.
The lodge is otherwise single storey and lean-to on the inside of the park wall, but this was not seen. The inner face of the tower was not seen either.

Interior not seen at resurvey.

Included for its special interest as being a part of the additions to the Llanover Park estate in the early/mid C19 designed by Thomas Hopper for Sir Benjamin Hall.