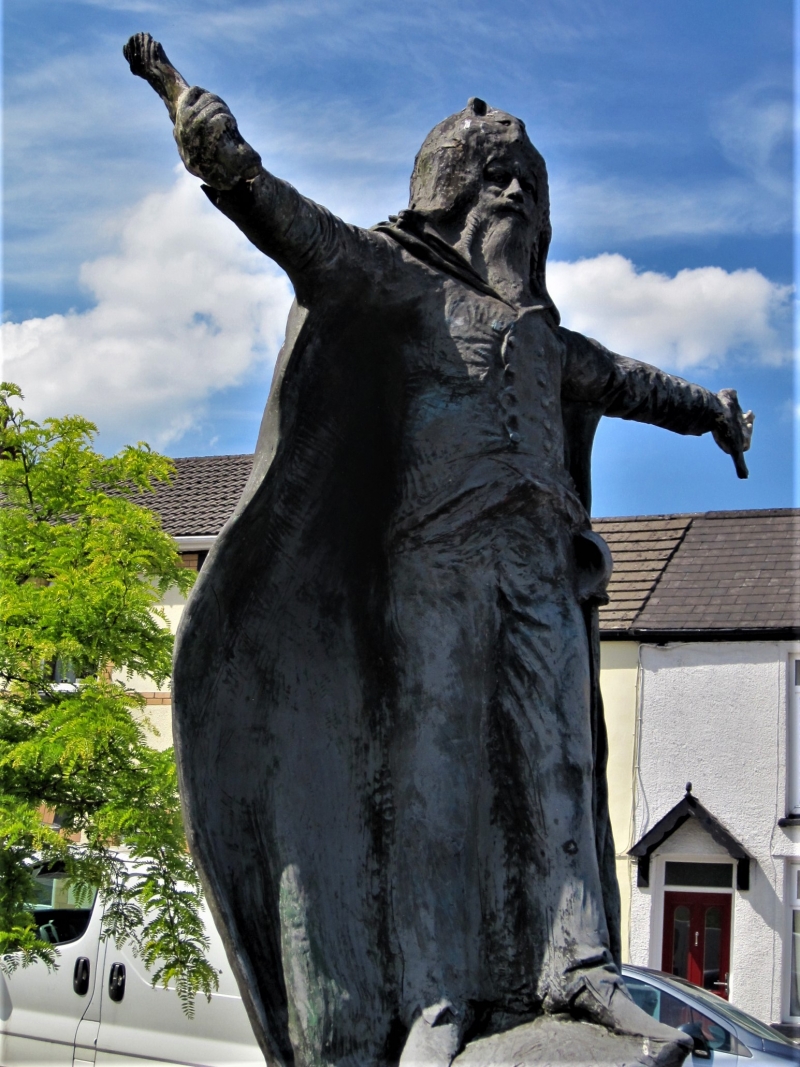 Location: In the centre of the Bullring in Llantrisant.

Dr William Price (1800-1893) was born in Rudry, Caerphilly and educated locally before becoming apprenticed to a local surgeon and then attending the medical school at London Hospital in Whitechapel. He was made Member of the Royal College of Surgeons in 1821 and returned to South Wales setting up practice in Pontypridd, becoming surgeon to some of the major industrial works in the area. At the Newbridge Chainworks he established a service where workers paid a subscription for health care, predating the establishment of Medical Aid Societies.

The social change brought about by the industrialisation and population growth in South Wales led Price to develop interests in Welsh nationalisms and druidism. He set himself up as a druid figure and helped to establish eisteddfod events and druidic ceremonies, some at the Rocking Stone above Pontypridd. He also became increasingly anti-establishment in his view and became a figure in the chartist movement.

In 1871 he settled in Llantrisant and married a 21 year old. In August 1883 she gave birth to a son who was named Jesus Christ but died at 5 months of age. Price attempted to cremate the child on East Caerlan hill overlooking Llantrisant. The awareness of the practice of cremation had increased since the establishment of the Cremation Society in 1874 but the actions of Price caused public outrage and he was tried in Cardiff on the basis that cremation was illegal. His defence was that although cremation was not legal it was also not illegal and he was acquitted. He died in January 1893 and was cremated. His beliefs and actions helped raise the profile of cremation and eventually, firstly with the Cardiff Corporation Act of 1894 and then the 1902 Cremation Act, cremation was legalised.

The statue was created by Peter Nicholas (1934-2015) and erected in 1982. Peter Nicholas studied at Cardiff Art School and the Royal College of Art. He was also responsible for the statue of Ivor Novello in Cardiff and that of Eddie Thomas in Merthyr Tydfil. The Price statue was commissioned by Taff Ely Borough Council in 1980 with advice from the Arts Council of Wales.

Statue of a standing male (William Price) with his arms outstretched ‘blown by the winds of adversity’. Dressed as a druid with a fox skin hat, cloak, a sword on his hip and holding a crescent moon in his left hand and a torch in his right hand. The figure stands on a boulder representing the Pontypridd rocking stone and facing to East Caerlan. Statue set within a circular brick base, flat top with conical outer ring. Slate panel to E side ‘Innovator of Modern Cremation’ around the depiction of a funeral pyre, then ‘Dr William Price. 1800-1893. Surgeon Chartist. And. Self Style Druid. Sculptor Peter Nicholas. Supported by the Welsh Arts Council. Unveiled by the Mayor of Taff Ely. Councillor George Preston 3rd May 1982. AP Isaac’.

Included for its special historic interest for its commemoration of an important historical figure who was central to the legalisation of the practice of cremation in C20 Britain, and for its special architectural interest as a good example of the work of one of the more prominent creators of public sculpture in Wales in the late C20.