Bayer House and raised pavements to north and south 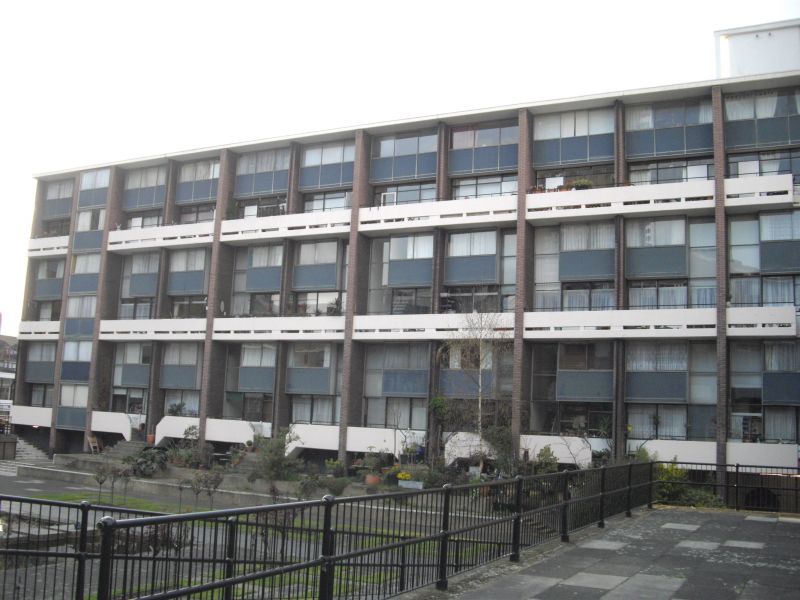 Pink brick cross-wall construction with brick end walls (with pink mortar) with concrete floor and roof slabs, concrete balconies (now painted) and coloured infill panels. Flat roof. Six storeys over basement stores. The maisonettes set in pairs along two rows, ten per pair of floors. Balcorries to south, the lowest row with paired steps down to shared garden area, with further steps to pool (see entry to community centre). The flats reached from access galleries, the upper maisonettes via end staircase shared with Stanley Cohen House (q.v.), with secondary escape stair in penultimate bay of opposite end. Most maisonettes have two bedrooms, larger units in western
two bays. On south elevation the crosswalls project forward to give privacy to each maisonette, and the block reads as three terraces-of houses, one on top of the other. Aluminium windows with timber facing to living room. The aluminium system seen on both elevations, and continues as framework for the brown (perhaps originally red) cladding panels set in bands under the windows. Upper floor bedroom windows project; set-back staircase windows to each unit in lower levels, continuous bands of glazing and brown panels to top floor of upper maisonettes. Brown-clad projection to end maisonettes at rear of escape stair. Concrete balconies with steel top rails, those to ground floor with glass screens between each pair of units. Brick piers to courtyard (entrance) side mark timber doors set in pairs. Access galleries with steel railings, wired glass balcony fronts on first, third and fifth floors serve fire escape balconies between bedrooms, those at end serve escape stairs. Part-glazed open-well staircase at end, with storey-high panes set in timber frames. Original signs survive.

Interiors with hardwood veneer floors, and glazed screens between kitchen and dining space. This combines with the double height of the internal stairwell to give a sense of greater spaciousness than is real, for the dimensions of the units were restricted under reduced minimum standards introduced in 1951. Open tread staircases increase this sense of airiness. On the lower floors these rise from within the living room, but those on upper floor are placed opposite the floor door. on top floor there are central bathrooms under clerestory glazing. Fitted cupboards and shelving of interest where they survive, though kitchen and bathroom fittings are not of special interest.

Subsidiary features. Raised walkway on north side of block part of composition leading from Stanley Cohen House to rest of estate. On south side steps lead down to garden of decorative paviours set with planting, with further steps to the community centre and pool.

HISTORY AND ANALYSIS
The development and importance of the Golden Lane Estate is explained in the entry for Great Arthur House. (City of London Corporation Record Office: Competition records 1951-2.